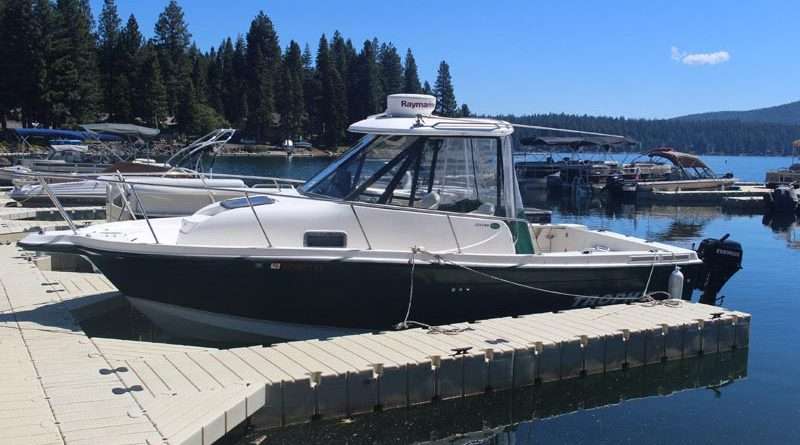 Owners of watercraft must pay a special biannual $16 fee to the DMV, before boats can be used in any bodies of fresh water in the state of California. The fee is used strictly toward educational outreach and prevention programs. Photo by Stacy Fisher
News
July 10, 2019July 11, 2019 Stacy Fisher, Staff Writer

It almost sounds like the plot of a terrifying science fiction movie complete with an invasion that has everyone running screaming from the theater.

But in this case officials are sounding the alarm before a real incursion hits closer to home. Or more specifically, contaminates picturesque Lake Almanor; one of the largest state reservoirs nestled in the northeastern corner of California.

Introduced through ballast water discharged from ocean-going ships and hitchhiking on the hulls and motor sections of recreational boats since the late 1980s, two species of non-native freshwater mollusks — commonly identified as the quagga and the lesser-known zebra mussel — have been marching relentlessly across the country infesting U.S. waterways.

Many Southern California lakes have already become home to the exotic freshwater bivalve mollusks, relatives of clams and oysters, and they continue to spread rapidly.

Invasive species are of great concern to fishery biologists, and a multi-agency taskforce of state and federal agencies, including California Department of Fish & Wildlife (CDFW), Division of Boating and Waterways, U.S. Bureau of Reclamation, and the National Park Service have joined forces to avert further infestations of the quagga mussels.

To stop the distribution of the unwanted species, these organizations are urging boaters to stay alert to help prevent the non-native mollusks from entering the waters of Lake Almanor, a popular destination for affordable family vacations.

With hundreds of vessels entering its waters throughout the year particularly during the summer tourist season, the Plumas County Sheriff’s Office and PG&E, owners of Lake Almanor, seek to coordinate efforts to prevent the harmful quagga from further infesting rural and urban environments.

The CDFW warms that non-native quagga mussels wreak havoc wherever they appear, by disrupting the natural food chain,”and in large numbers can cause a shift in native species and a disruption of the ecological balance of entire bodies of water,” affecting the unspoiled conditions of lakes and streams for future generations.

Because they reproduce quickly and in large numbers, left unchecked the mollusks potentially create a serious negative economic impact to California fisheries, and threaten water delivery systems, and interfere in the function of hydroelectric facilities by clogging cooling systems, where countless mussels can obstruct intake valves.

As quagga mussel larva mature, they are often drawn into boat engines, cover steering components, as well as form encrustations on docks, ramps and other marina infrastructure. They damage boat motors, and litter beaches with sharp, foul smelling shells.

Quagga can live at the water’s surface to a depth of hundreds of feet, and can survive as long as seven days out of water depending upon temperature and humidity during the summer months.

Unfortunately, because they reproduce rapidly, once established eradication is expensive and exceedingly difficult to achieve. Their presence in Lake Almanor and other nearby waterways and lakes could pose a serious environmental and economic threat to the region.

It is therefore imperative that boaters visiting Plumas County inspect for mussels when they transport their boats from distant lakes, well before launching into Lake Almanor waters.

Recreational boat owners who boat in any bodies of fresh water in California are by law assessed a biannual $16 fee along with their boat registration, and must display the “Mussel Fee Paid” sticker next to the registration sticker on their boats.

Owners are required to manage their recreational boating activities through voluntary inspection and decontamination of any mollusks that have attached themselves to their vessels, before they have an opportunity to be introduced elsewhere.

Currently PG&E periodically monitors the waters of Lake Almanor, employing methods provided by the CDFW during the summer months (May-October) when the mussels, if present, would be most active.

To date, there are no reports that the insidious creatures have found their way into the pristine waters of Lake Almanor — but ignoring the threat of infiltration could be a very expensive mistake, county officials warned, since quagga mussels have few or no natural enemies, and once they get into a lake or stream, they easily dominate the aquatic ecosystem.

Just one oversight by a single boater and the harmful species could forever infect the clear blue jewel of Plumas County.

Because the freshwater mollusks pose such a serious threat, California is asking boaters as a rule to drain, clean and dry their boats. Properly cleaning and drying can help boaters avoid quarantines or being turned away from a water destination in order to keep water bodies mussel-free.

In addition to being sure to clean watercraft thoroughly, the Division of Boating and Waterways urges boaters to plan for possible launch restrictions and inspections conducted by state officials, individual reservoir owners or water managers.

California Department of Fish and Wildlife: