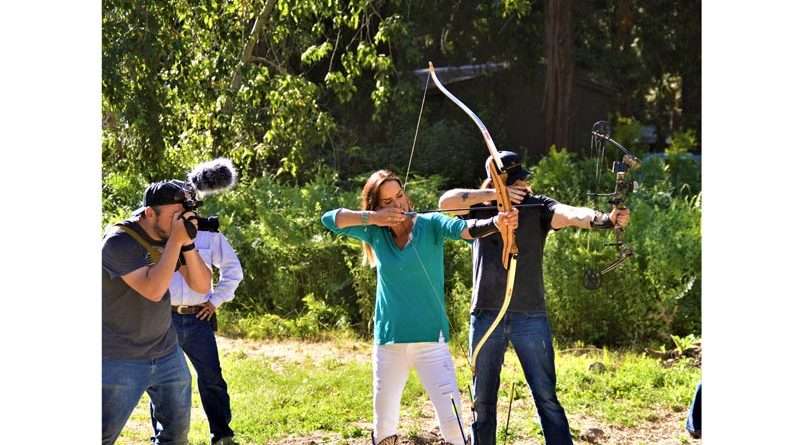 Matt Avant shoots footage at Greenhorn Ranch for an upcoming episode of “Debbe Dunning’s Dude Ranch Round Up” as Dunning and Rick Monroe take aim. Monroe, a Nashville country artist and friend of Dunning’s, came out to participate in the show, and he opened the Friday concert at the Ranch. Photos submitted
News
August 7, 2019August 12, 2019 Linda Satchwell, Staff writer

Television star Debbe Dunning was at Greenhorn Ranch with her stripped down, multi-talented crew last week to film an episode of “Debbe Dunning’s Dude Ranch Roundup,” a popular television series on RFD TV and The Cowboy Station.

Dunning is perhaps best known for her role as Heidi Keppert, the “Tool Girl” on Home Improvement’s show within a show, “Tool Time.”

She visits dude ranches all over the United States to highlight what is special about each one, determined to bring an awareness of the unique joys of this rural experience to a wider audience. And, she hopes that people who might never have thought of visiting a dude ranch will be encouraged to do so.

We met at high noon in the Greenhorn Ranch saloon. Dunning was friendly, outgoing and passionate about her current show, in which she shares the magic of the “rural western lifestyle.”

Her inspiration, she said, came from a dude ranch vacation she took with her friend Jennifer Larkin. They were only there for a week, but they loved it so much they thought they’d create their own dude ranch. “We were going to call it Whiskey Tango Ranch,” Dunning said.

They returned home to children and a busy life and Whiskey Tango remained a good dream. That incredible experience stayed with her, though.

Then, a couple of years ago, Dunning was in Arlington, Texas, for RFD TV’s “The American,” a high stakes rodeo, where she got talking with RFD TV’s owner Patrick Gottsch. According to Dunning, Gottsch told her to come up with a show, and he’d partner with her on it. Dunning was turning his offer over in her mind as she was getting ready for her flight home.

She came up with the idea of “doing a show all about dude ranches, traveling around the U.S. and showing why people come back to them,” she said.

Then, a stroke of luck saw Dunning and Gottsch leaving out of the same airport at nearly the same time. They had just a few minutes for a quick meeting between their two gates. Dunning led with, “What about a dude ranch show?” and Gottsch answered, “Let’s do it!”

It all happened so fast, Dunning said she checked with a good friend of hers, Russell True, who owns White Stallion Ranch in Arizona when she returned home. “Do you think I can do this?” she asked. And, he said, “Absolutely.” So, with that, she jumped into the project with her boots on.

Dunning attributes a large part of her show’s success to her very small, exceptionally tight team. She brings Matt Avant and Jon Wesenberg on every shoot. They produce, shoot, write, do sound and graphics, and edit every show. Dunning said she does her own wardrobe, and she usually has a make-up artist, but that’s it. “It’s incredible and very rare. That’s why I want to include them,” she added.

“We work for RFD TV,” said Avant. “Jon and I had been brought in for this show. They introduced us to Debbe. We had no idea about this. We didn’t know, we’re city slickers. It just turned out to be the coolest thing ever. We’ve become experts — this is number 32. You realize there are these little havens pocketed away.”

He added that the dude ranches are “the last vestige for people really, genuinely trying to make you have a good time. They really care, you can tell.”

When he and Wesenberg write the script and edit, it “gives us a chance to relive it. Working another week on it, we’re still in that world. You get to know the people through editing,” said Avant. “I feel like we know those people so much better.”

Avant and Wesenberg typically shoot about four to six hours of footage. One of the biggest challenges, said Avant, is getting good shots during the horseback rides. He and Wesenberg are in vehicles trying to position themselves to get shots that will allow the audience to feel like they’re along for the ride. “You [shoot] a bunch of stuff,” he said, “and hope you capture the moment.”

Dunning added that every time she talks to people during a shoot, “everybody is real. When you talk about something real, the light shines.”

Every dude ranch has something special to offer, Dunning explained. What stood out at Greenhorn Ranch were the “gorgeous, panoramic views” and the forest, which offers a myriad of trails for both hiking and riding. “This place was one we really liked personally,” she said. “The [outdoor] BBQ, with the creek and trees is so serene. We wanted to camp there.”

She said, also, that Greenhorn Ranch stood out as “number one or two hospitality wise. It’s an incredible staff — every single one.” She especially appreciated that Dennella West brought flowers picked from the property to her room. Dunning explained that she would pick wildflowers at every dude ranch she visited. “You have no idea how big a thing that is,” she said.

And, she called out Claire Coelho who directed the frog races and was “so enthusiastic with fishing and feeding worms,” while at the same time easily wrangling a group of enthusiastic young people.

Dunning invited her friend Rick Monroe, a Nashville country artist, to come to Greenhorn Ranch with her and participate in the show. He was also set to open for fellow Nashville artist Stephanie Quayle at Greenhorn Ranch’s Friday night concert.

It was Monroe’s first dude ranch experience. He loved how friendly everyone was. “I don’t feel like it’s a vacation, it’s like I’m at somebody’s house. That’s the best part to me,” he said.

Monroe also went fly-fishing, something he’d always wanted to do. “I’ve never been able to. So, Mike Pease was showing us how to do it. Once I started, I got completely addicted . . . when I landed that fish — it was amazing.”

The other thing that Dunning said she loves about dude ranches is that the fully immersive, western experience “can leave a bigger imprint [than the usual vacation], empowering your children and giving them a horse, giving them the freedom they get at these ranches. You’ll see how much confidence these kids leave with … they’re doing what they should be doing — imagining, discovering — it’s one of the best American vacations you can give your kid.”

She noted one special example she’d seen that morning: A couple had brought their granddaughter here, and she was sitting in her grandfather’s arms, talking with him. “To have a one on one like this is so special. There are so many little moments like this.”

We finished out our day in the large, open dining room. Steve Harvey, one of the enthusiastic new owners who bought the Ranch in 2018, pointed to a couple eating lunch. This was their second visit, he said, the first one was 41 years ago.

“They said the view is just the same,” said Harvey, “nothing has changed. Except last time they were here, Cary Grant was staying here.”