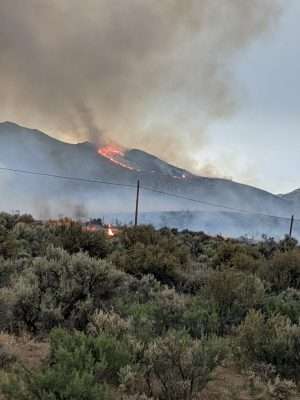 UPDATE 3:45 p.m. June 24: As of this afternoon, fire crews are mopping up the three fires that broke out in Chilcoot yesterday following lightning strikes in the area. Firefighters from Sierra Valley, Beckwourth, Loyalton and other volunteer fire departments, along with crews from the Forest Service and BLM worked on the blazes throughout the night. Sierra Valley Firefighter Brian Evans said that current conditions out there now are hot and breezy with thunderclouds forming again. He said that he and other firefighters have had a busy 24-plus hours — first with the motorhome fire at Frenchman yesterday, then the Chilcoot Fires. One, dubbed the Railroad Fire, was held at about 190 acres; while a second called the Hill Fire, was held at about 60 acres. The third fire was much smaller. Plumas County Search and Rescue was also on scene in case evacuations became necessary.

UPDATE 7 p.m. June 23: The Forest Service is reporting that there are three fires now burning in the Chilcoot area, each about 30 acres. Motorists on Highway 70 reported fires burning in the Chilcoot area early this evening following lightning strikes in the area. Staff Writer Lauren Westmoreland reports that one fire is burning on Scott Road, south of Highway 70. She said that it is curving up the mountain to Beckwourth Pass. The area is under the jurisdiction of the Bureau of Land Management. The Plumas National Forest is responding with an engine and a dozer to assist. Residents in the area are under a voluntary evacuation order.