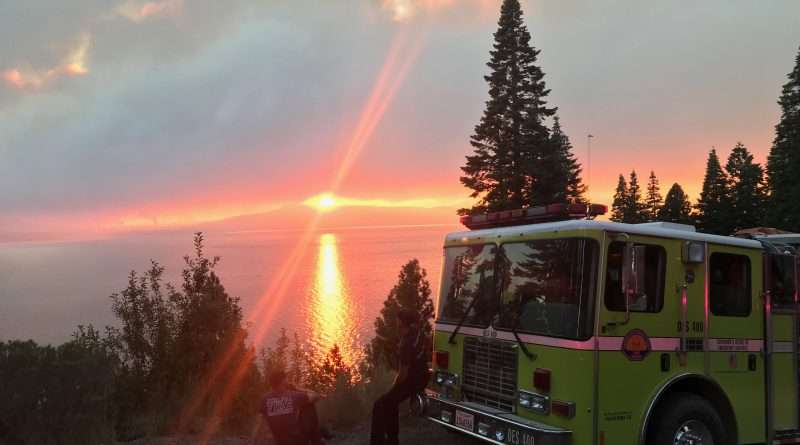 A Search and Rescue rig watches the fires and sunset from the Peninsula. Photo by Graham Shea
News
August 4, 2021 Editor

Operations Section Chief Mike Wink provided a morning update on the Dixie Fire West Zone this morning, which includes the communities of  Chester and Lake Almanor, both under mandatory evacuation orders as of yesterday afternoon.

Wink described the fire growth above Humboldt Road that led to the Chester threat. In previous updates he addressed the pockets of unburned fuel within the fire’s perimeter. He said one of those pockets had some heat built up in it, far off the fire’e edge, but then it grew and spewed embers across the containment area, landing in heavy timber. It wasn’t seen until it was picked up by infrared technology.

This led to a very large pyrocumulus plume growth, which is expected again today and tomorrow. Red flag conditions start at 1 p.m. and last for 48 hours. Wink described this red flag warning as different, because the winds are coming from the southwest rather than the north, which puts the fire’s trajectory pointed toward Chester. Tomorrow the winds will rotate and come from the northwest. These changing winds are very dangerous for firefighters and they have been briefed and know where their safety zones are located.

With Chester in the predicted path, crews are using retardant and dozers to build a line around the town. As the fire moves toward Chester it transitions from heavy timber to smaller fuels, making it easier for firefighters to build a line.

As for the West Shore, Wink said that the finger that burned to the lake – burned to the outside edge of the community of West Almanor. “No structures burned,” he said. Dozer line is in place.

Wink also addressed the Caribou drainage, which is showing heat on both sides, which means the West Zone and East Zone management teams are working to prevent this piece of the fire from spreading.

Wink summed it up when he said that here are “lots of moving parts and pieces,” which unfortunately are forecast to move a lot more over the next 48 hours.