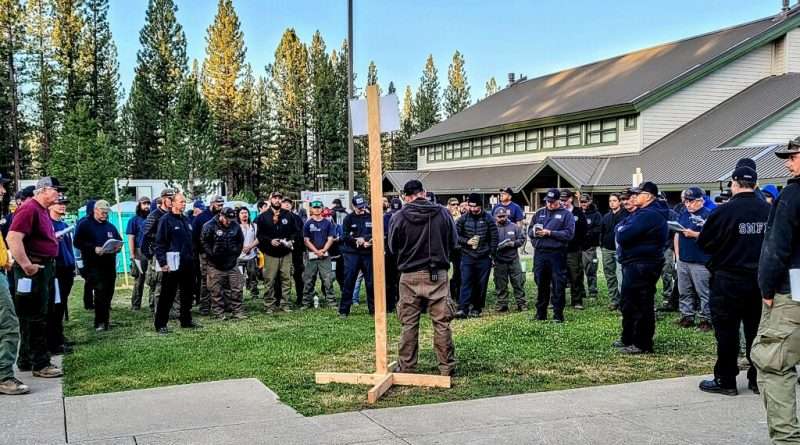 Firefighters gather in their divisions following the 6 a.m. briefing held at C. Roy Carmichael Elementary School on July 13. The camp will be relocating this weekend. Photo by Lauren Westmoreland
News
July 13, 2021July 16, 2021 Editor

Portola residents are used to seeing a large contingent of firefighting personnel in the city, but that is about to change. The fire camps, which have been established at C. Roy Carmichael Elementary and Feather River Middle schools are now relocating to a ranch in the Sierra Valley. More details about the location will be confirmed later.

When asked about the relocation at this morning’s briefing, the public information officer for the incident command team said the move was necessary due to a planned roofing project on the elementary school campus.

Plumas Unified School School District Superintendent Terry Oestreich confirmed the move this morning. In addition to the school projects, Oestreich said that the move was also due to the location of the fire, the need for more space to accommodate the operation at one location, and the need for fire camp to be in existence in August, which would impede getting the campus ready for the new school year. Plumas Unified students return to the classroom Aug. 23, and staff and teachers the week prior.

The move is expected to occur this weekend July 17-18 so the public should be prepared to see some heavier traffic in the area.

“As you likely know, our school is a fire camp this summer.  It’s an incredible little city of crews who work 16 hour shifts and come back to the school for food and sleep.  The night crew sleeps in classrooms and the day crew sleeps in tents.  Every nook and cranny of the school is filled with incident management personnel, fire crews, and support staff.  Jesse and Todd are currently working the fire and Mike and Justin are holding down the fort.

Team 4 Incident Management and our fire crews would like you to know that they love our school and the inspiration they read from our PBIS posters and classroom walls.   Here is a picture of Mike  and Jake. You know Jake (Cagle) if you watch his Facebook updates each day on the USFS page.  They nominated themselves for the Principal’s Award and texted me this picture to share with you. They have made themselves at home in our office and remain positive, energetic, and really fun, despite little sleep and lots on their plate.”