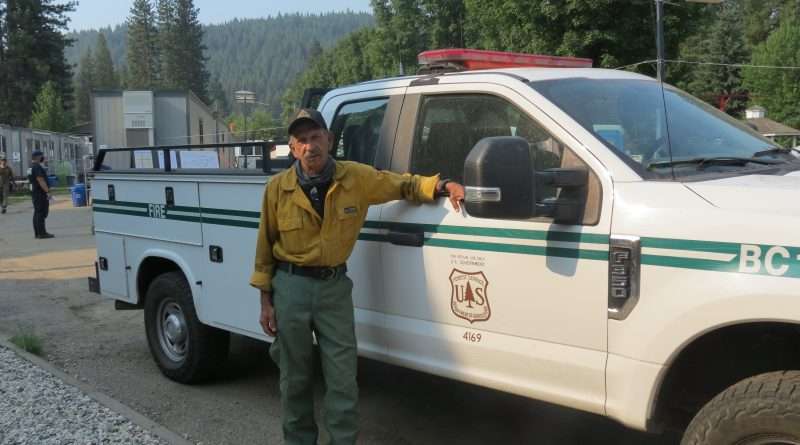 This is Dennis Burns's second fire in Plumas County. He was also assigned to the Moonlight Fire. he said the Dixie and Moonlight fires are the two most challenging he has been on due to the extreme fire behavior. Photo by Debra Moore
News
August 2, 2021August 4, 2021 Editor

Rock stars emerge in the most unlikely of places. In Plumas County, for residents reeling from the Dixie Fire, that person became Dennis Burns.

Twice daily, he presented concise, candid briefings on what was occurring on the East Zone of the fire. He became such a familiar face, that people stopped to thank him when they saw him out and about in Quincy.

Dennis Burns is the fire behavior analyst for the incident management team assigned to the East Zone. He brings with him 41 years experience as a firefighter and 23 years as part of a Type 1 team, as well as serves on national fire behavior committees.

And that knowledge is on full display during his briefings, which prompted a letter written on behalf of the Quincy Peeps Facebook group that numbers more than 4,000. Its founder, Deb Hopkins wrote, “I want you to know that your morning and evening Dixie Fire briefings have provided an immeasurable comfort to the community … People went from near hysterical with worry —like boats with no rudder, to calm and purposed.”

I shared that letter with him as we sat down for conversation Sunday morning, Aug. 1, in fire camp at the fairgrounds. He appreciated the sentiment and the community’s support as he and the rest of the team fight what he described as perhaps the “most challenging fire” he has faced in his career.

Burns is no stranger to Plumas County. He was here for the 2007 Moonlight Fire, which he compared to the Dixie Fire, for their “off-the-charts fire behavior.” The difference with the Moonlight, he explained, was that it happened in September with a Red Flag warning in place. The Dixie broke out July 13, still very early in fire season. When his team arrived to set up base in Quincy, the fire was exhibiting extreme behavior with five active fronts.

Then the Fly Fire broke out. Burns was asked what would have happened with the Fly Fire if the resources weren’t already in the area fighting the Dixie. Extending his arm, he pointed toward the airport. “We had the helitak base right here and crews right on top of it, and it still took off,” he said. In the absence of that support, Burns said the fire “would have been past Taylorsville. It just shows what this fire season will be.” Burns used the phrase “will be” because the traditional fire season is just getting underway.

The Fly Fire’s ferocity was a surprise and it blew past standard fire modeling. Burns said that he and his team adjusted the model, and the fire’s behavior matched up perfectly for what would be expected for a Southern California chapparal fire, which demonstrates just how dry the fuel in the Plumas National Forest is.

Burns discussed technology and how its advancements have helped firefighters, including remote sensing satellite views. “You can actually see a fire on the landscape,” he said. But it’s interesting to learn that there aren’t official personnel monitoring those satellite views 24 hours a day; it’s sometimes a member of the public who first spots a fire.

Advanced technology also helps the firefighters communicate with each other and the public — such has been the case on this fire — which was spread over two incident management teams, two national forests, three counties and three fire camps.

Until the second incident management team and fire camp were established in Quincy, Plums County residents were uneasy. The initial briefings, originating from the Cal Fire incident command base in Chico, included some inaccurate references to areas within the county that concerned residents. When asked how long it takes him to become familiar with an area, Burns said,  “about a day.”

But in just one more day Burns will be wrapping up his time in Plumas County as the team’s 14-day rotation comes to a close. While that might be unnerving to local residents who watched the familiar face of Jake Cagle and his team leave the North Complex Fire last year (only to return again), Burns assures everyone that they will be in good hands. “It’s another Type 1 team, and it’s California based,” he said.

Burns said that most of the people who serve on incident teams also live in fire-prone areas and they are empathetic to residents’ concerns and fears. “I live in the foothills (of Calaveras County) and we have been evacuated twice,” he said. He and his family take evacuation orders seriously, and Burns shared a story of a firefighter friend who was severely burned when he rescued a woman who had not evacuated. Fires are unpredictable he said. Even fires that are seemingly contained can “make a U-turn.”

Burns discussed the initial days of the Dixie Fire when it was spotting 1 to 2 miles ahead. The right conditions could cause that to happen again so residents must remain vigilant. When a fire spots, it can ignite a new fire and that new fire will pull the original fire with it, exacerbating fire behavior, he explained. The “fire-on-fire” effect is one of the topics he teaches in his Advanced Fire Behavior classes for Region 5 of the Forest Service. Burns currently works on the Stanislaus National Forest, after retiring from the Livermore-Pleasanton Fire Department where he worked for 33 years.

Perhaps his teaching experience is what makes his briefings so well received by the public. When asked if he has noticed a difference in his audiences — have they become more fire savvy — he responded that it depends on the area. “A lot of people have become more involved,” he said and mentioned participation in Firewise communities as an example. When asked if that is helpful, he said, “It’s huge; it empowers a community.”

If Firewise is impactful on the community level, what can be done on the forest level to combat the ever-increasing fire threat. “We’ve got to get fire back on the landscape and manage that; it’s the fuel loading,” he said. Fires enter terrain that is overgrown and parched from years of drought and explode into mega fires.

Fire combined with mechanical thinning would help in a number of ways. Overgrown forests prevent snow and moisture from hitting the ground, where it can be absorbed and stored, thus causing drought conditions in the forests. Thick forests also make it more difficult for firefighters. He said ideally firefighters go direct — meaning one foot in the black and one foot in the green — but that can only be done if the conditions are right and if there are adequate resources. Because the Dixie Fire was relatively early in fire season, a great deal of resources were allocated to it.

And some of those resources will be around for a while. The fire is about one-third contained as of Aug. 2, and there will be interior burning for quite some time. (Last year the North Complex wasn’t declared 100 percent contained until early December.)

As some firefighters continue to actively fight fire, crews will begin suppression repair, and teams are planning the long-term restoration efforts.

But by Wednesday if all goes as planned, Burns will be back home in Calaveras County for at least two days of mandatory rest, before he will head out to his next assignment, which could be anywhere in the United States, though most likely somewhere in the West battling another fire. Incident management teams aren’t only for fire, they are assigned to natural and manmade disasters of every type including hurricanes and floods, and they can be assigned at any time of the year — Burns once spent Christmas and New Year’s on a Southern California fire.

What’s the first thing he will do when he gets home this week? Take a shower? Sleep? No, spend some time with his dog and his wife. Burns speaks with his wife nightly and he has mentioned her in some of his briefings — for example when he accidently called the Dixie Fire, the Delta Fire — she let him know.

But does she know that he’s a rock star? He laughs. “She follows social media,” he said, even though he doesn’t. But he knows he’s appreciated. People tell him, and someone even painted a watercolor of him when he was working on the Apple Fire. He didn’t say if it’s hanging in his home, but as more Plumas County residents are returning to their own homes, they thank Dennis Burns, fire behavior specialist and local rock star.