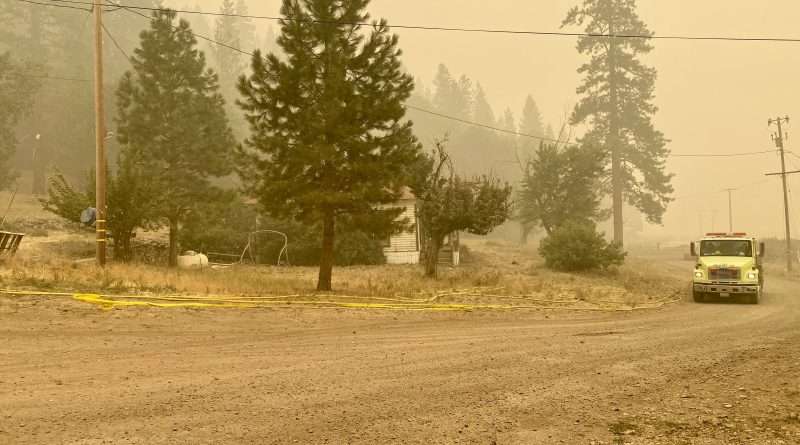 Hose lay is placed around structures in the Diamond Mountain Road area to protect them. It will be needed in tonight's fire fight. Photo courtesy of USFS
News
August 13, 2021August 15, 2021 Editor

As of this evening, Aug. 13, the Dixie Fire is 537,776 acres and 31 percent contained. Tonight’s community meeting for the East Zone experienced connectivity issues similar to what the West Zone experienced three nights ago, causing the West to post a prerecorded video last night instead of attempting a live feed. The East Zone made it through tonight’s presentation, but with several interruptions. (The zones are alternating nights to share community briefings. Tomorrow the West Zone is up.)

Tonight, viewers heard informative explanations of thunderstorms and fire behavior from the incident meteorologist and fire behavior analyst. A month into this fire, local residents  have a pretty good understanding of what a thunderstorm does to a fire: little rain, lightning with the potential for more spots, and erratic winds. Winds push a fire and erratic winds push a fire to places firefighters don’t want the fire to go.

That’s what happened tonight on Keddie Point and the North Arm area where firefighters are engaged in a fire fight to save structures. Operations Section Chief Kyle Jacobson said that crews have dozer lines, hose lay and retardant to help them. “We want to have every possible option to defend these structures,” Jacobson said. He added that surge resources have been called to the area to help.

Incident Commander Rocky Opliger reiterated the impact that the thunderstorms have had on the fire over the past two days. He explained that when one developed just over North Arm this afternoon, downdraft winds of 30 to 50 mph developed pushing the fire in all directions.

He also spoke on behalf of Plumas County Sheriff Todd Johns and Carson Wingfield — one was on the ground trying to evacuate people and the other was running the Emergency Operations Center. Opliger stressed again the need for people to evacuate an area when ordered. When the firefighters entered the area to aggressively fight the fire today, they found people who had either never evacuated or who had re-entered, once again forcing firefighters to save lives over structures.

Amazingly, at the end of the community briefing, Jacobson said there were inquiries from people as to when they could re-enter that area. You have to admire his poise while he carefully explained why that was unknown at this time.

Fire also increased in the Hamilton and Dyer mountain areas, but conditions allowed aircraft to fly and they tried to slow the fire’s progression to the south and to the east. Fire also pushed into Wilcox Valley.

The conditions that caused so much fire growth today is expected again tomorrow.

Today the fire spotted over A21, the Johnson Grade and Highway 36. Westwood, Clear Creek, and Hamilton Branch were having fire approach from both sides. Structure protection is in place and it was reported that crews are in an active fire fight.

As of late this afternoon, the Chester Fire Department that no structures had been lost in town.

More will be reported on the West Zone in the morning update, as well as in tomorrow night’s community meeting set for tomorrow evening at 7 p.m.

Carlton also announced that four campgrounds are open for evacuees: Meadow, Rock Creek, Dean’s Valley and Red Bridge. (Meadow Valley area and La Porte Road) “There is no water; you will need to pack out your trash; and no campfires. I know that’s not ideal,” he said, but could be preferable than sleeping in a vehicle. Call 530-289-6735 for more information.

Opliger said the West Zone is facing familiar situation around the the north part of Lake Almanor and Westwood where the fire is pushing in on them from two sides. Janesville is not threatened currently.