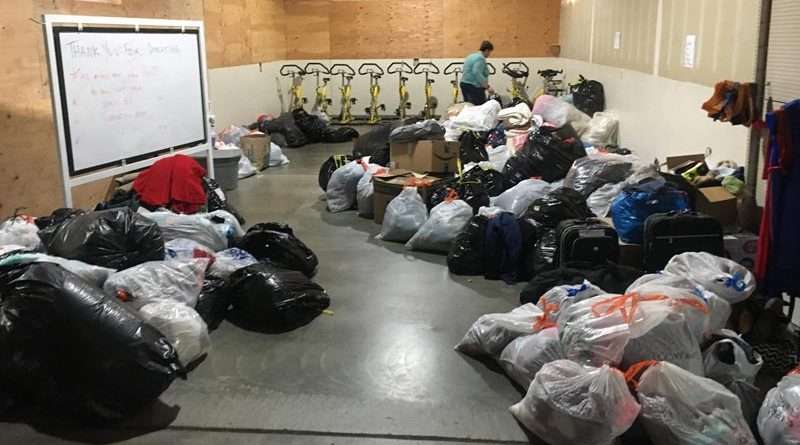 Volunteers in Eastern Plumas County work late into the night Nov. 9 organizing donations brought to Portola’s Healthy Bodies Gym in an outpouring of support from the community to provide aide for those affected by the Camp Fire. Photos by Caitlin Comstock
News
November 30, 2018November 29, 2018 Lauren Westmoreland, Staff Writer

On Nov. 8, what is now known as the Camp Fire sparked in the Pulga Road area in Butte County. Within a few short hours, the blaze exploded into a wildfire that has ultimately razed communities such as Paradise to the ground.

Caitlin Comstock, a longtime local, is one of many in Plumas County that have friends and relatives in Butte County.

The morning the fire sparked, Comstock explained, “My first reaction was to call my mom because our family, primarily her dad and sister, live in Magalia. They were already on the road and being evacuated as early as 9 a.m. that Thursday morning.

“By mid-day when word spread that the fire was becoming serious and people were having to flee for their lives, and not just as a precaution, and Paradise was truly on fire, it became obvious that this was a huge ordeal as well as being close to our hearts with Butte county being so nearby, and many people from this area having friends and family down there.”

Comstock couldn’t leave it at that, however, and immediately spearheaded a community effort to bring together urgently needed donations of everything from clothing to diapers and bottled water.

The request for aide asked the communities in Plumas County to collect and donate items for the survivors of the fire, and two donation centers were opened — Healthy Bodies Gym in Portola and Quincy.

Comstock noted, “I am indeed responsible for kick starting both donation centers. In my experience with helping coordinate fundraisers primarily, the first task is a location. I am super blessed to work for a great couple who are not only long time Plumas County residents, but have giant hearts and giant facilities, and allowed us to use both gyms of Healthy Bodies in Portola and Quincy, Andrea and Bobby Murana.

“Between our generous community, social media and a location it was really easy to get the word out for donations, and to get volunteers on board to help out last minute. If you are not working for your community, then you are not part of that community, you just live there. There is a need in your community every day, it takes one person to step up and step out and take initiative, and the rest will follow.”

When asked about the community response to the donation efforts, Comstock explained, “After I put the idea out about taking in donations, and that volunteers were needed, I had multiple responses in donations and volunteers almost immediately. Everyone wants to help, it’s just about giving them a platform and instruction to do so and in a situation like this, both of those are important.

“Things can get really out of hand quickly if there is no plan. For example, getting a specific list of needs out, and also volunteers to sort through the donations before we send them out, and/or send unnecessary items.”

The response from the community in the call for donations in a short amount of time was incredible, Comstock explained, smiling.

“By the end of Saturday, the floor of the Portola location of Healthy Bodies was completely covered, and in some areas such as the bedding section, there were piles up to our waists. By the second day, we needed the use of Cindy Woods’ large office space next door at Woods Fire to start taking donations because we were simply out of room. We ended up filling the equivalent of two 14-foot long box trailers to the max. It was so touching to see the community come together.”

Comstock explained that the community members involved were happy to be involved and have an outlet to direct their emotions into. “A lot of local people were affected by this tragedy, knowing someone directly affected by the fire, and I think it was really healthy to be able to direct our sadness into energy and just help.”

Comstock had some words of thanks for the many that have come together in this time of need, saying, “I’d like to specifically thank Stephanie Tanaka for immediately volunteering to spearhead the relief efforts at the Quincy Healthy Bodies Gym, and her team, Julie Tanaka, Joni Moore and Julianna Arteage.

“Also, thanks to Julz Statler for helping get donations moving to Butte. On my team, a giant thank you to Tiffany Wagner who immediately jumped in without question and stuck by my side for the entire two days of organizing, as well as Tiana Bradley, Grace Greenwood, Cindy Wood, Corky Henson, Angel Weaver and many, many others who jumped in and volunteered at the drop of a hat.

“I would also like to thank Mathew Goodson and Wayne Kelly of Greenville, who brought a giant trailer late in the evening to help us get all of the donations out the very same day, so gym operations could continue. Finally, a giant thank-you to the community! At one point on Sunday evening, we had three volunteers to load two warehouses of donations.”

Comstock sent a message out that they needed volunteers by 5:30 p.m., and in just under 30 minutes, 25 people showed up. Half of them, she didn’t even know. Comstock said she was overcome with gratitude and emotion.

In days to come, Comstock and the communities of Plumas County plan on continuing relief efforts in any way possible.

Comstock noted, “Once we know more about what is needed in the next few weeks by evacuees trying to rebuild, we plan to do a second donation day at both locations, to immediately be able to get specific needs to specific families. We are also talking about doing a benefit concert to raise money that will go directly to the families affected.”

For those who may wish to help with either a donation day or the concert, contact Caitlin Comstock directly at 249-2758.