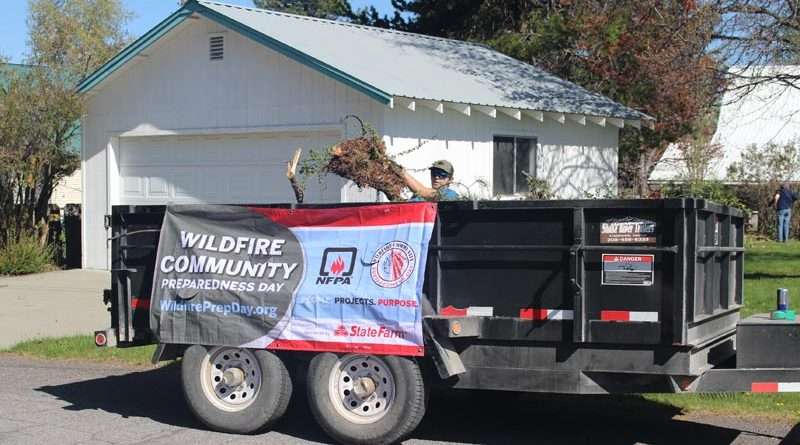 Volunteer Liam Bengaard empties one of many handfuls of backyard garden debris to assist a senior resident on Wildfire Community Preparedness Day May 4. Photos by Stacy Fisher
News
May 19, 2019May 16, 2019 Stacy Fisher, Staff Writer

A team of volunteers worked to clear brush and debris from two Chester homes on Saturday, May 4 as part of the Wildfire Community Preparedness Day.

The event was scheduled to provide an opportunity for community members to learn more about the importance of maintaining a defensible space around their properties to help mitigate the potential of embers from wildfires igniting spot fires. It is the number one threat to residences vulnerable to fire, cautioned Karen Lichti, CFD public information officer and Chester Firewise Committee member.

Lichti said to start protecting your home by establishing a safe zone where fire cannot easily propagate within the first five to 30 feet around your dwelling, by cleaning up your property and eliminating flammable materials like dead branches, dry vegetation and potential fuel sources.

Under the auspices of the Chester Fire Department, the Firewise Committee has been sounding the alarm even before the Camp Fire last year devastated the town of Paradise and other nearby communities, destroying thousands of dwellings and businesses, killing 88 people and injuring three firefighters.

Although seasonal fires are not unexpected, for the past few years conflagrations have expanded in intensity and extent in the California wilderness due to climate change and other factors, driving up state costs and increasing the risks to fire personnel and residents alike.

Taking precautions in a rural community surrounded by forest is just common sense, Lichti said, and lessen the private struggles and lost livelihoods of fire victims.

“The danger is real,” insisted Lichti, “and the time to prepare is now.”

The CFD has free “Firewise” materials for homeowners with information detailing ways to reduce fire hazards around your home or business. It could make all the difference between being prepared for this fire season and risking your home to wildfire.

That’s why the Firewise Committee urges homeowners to recognize the importance of “hardening” their property in the event that a regional forest fire threatens, including organizing an evacuation plan.

The statewide Power of Being Prepared campaign is being led jointly by San Diego Gas & Electric, Southern California Edison and Pacific Gas and Electric Company, at the direction of the California Public Utilities Commission.

The multimedia and multilingual campaign includes radio ads, preparedness resources and a new website, prepareforpowerdown.com. It is a call to action for all Californians to take important steps to get ready before the 2019 wildfire season, such as creating a thorough emergency plan and updating their contact information with their energy company.

According to a recent report released by Governor Gavin Newsom’s Strike Force addressing wildfire issues, “More than 25 million acres of California wildlands are classified as under very high or extreme fire threat. “Approximately 25 percent of the state’s population — 11 million people — lives in that high-risk area.”