Skip to content
News
July 26, 2021 Editor
Zeke Lunder, a Westwood native and fire professional now living in Chico, has amassed a following on Facebook and Twitter during the Dixie Fire. He has consistently supplied relevant and factual information, and even some insightful forecasts, often before the official Cal Fire and USFS sources. This morning, July 26, he has provided another interesting briefing regarding the fire’s spread:
The Dixie Fire took a breather yesterday. Spread was greatly dimished under extremely heavy smoke cover. Forecast instability wasn’t enough to suck out all the smoke, and the shading from smoke, coupled with lack of air movement kept things fairly quiet. The biggest run on July 25 was north of Bucks Lake, where the fire ran a mile. Everywhere else, spread was around a 1/4 mile or less.
Maps are from IR flight July 25 at 10:30 p.m. Firing progressed 3 miles toward the south on Humboldt Road. Fire grew 1/4 mile or less toward Jonesville. Fly Fire is backing slowly above Taylorsville, has crossed China Grade.
White lines = 24 hr growth.
Data: Courtney/NIROPS 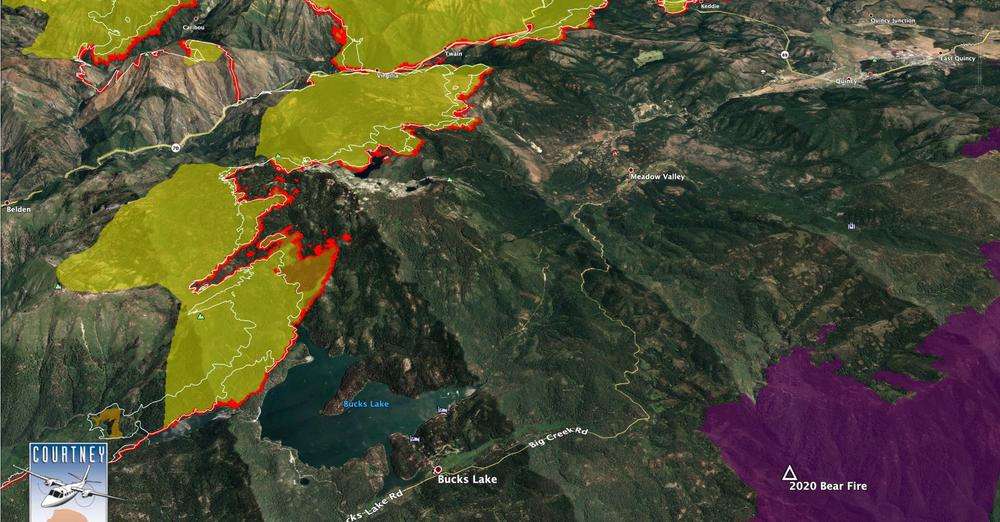