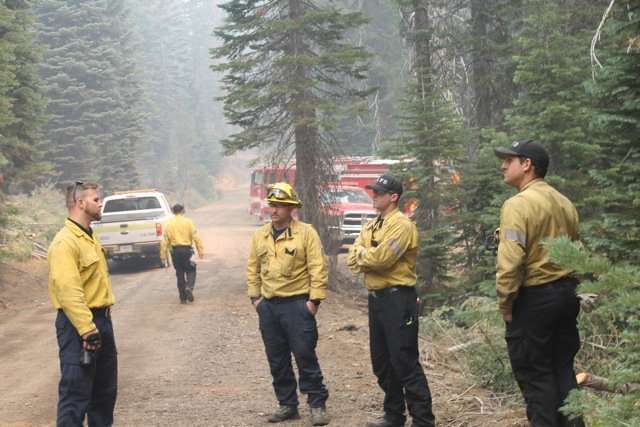 Left is Kye Funk, a public information officer with the North Complex. He’s discussing Bear Fire concerns with members of a strike team made up of firefighters with the city of Los Angeles. Photo by Victoria Metcalf
News
September 15, 2020September 18, 2020 Victoria Metcalf

Thousands of feet of light-taupe and neon-yellow fire hose spread along driveways and encircle homes like inert snakes as part of a structure protection emergency plan in the Bucks Lake Highlands development.

The hose arrangements are just part of a structure protection project within an off-the-grid development near Bucks Lake. These homes and others are within easy striking distance of the Bear Fire as part of the North Complex set of fires.

It was about noon Friday, Sept. 11, when members of various Southern California fire departments found themselves not commemorating 9/11 services or remembrances in their home communities, but protecting structures belonging to others in rural Northern California.

According to Bill White, a battalion chief with the City of Atascadero Fire and Emergency Services, the Bear Fire was at a safe distance of about two miles away from Highland homes. That distance could be quickly covered however in a wind event like the one last week that blew up the Bear Fire. Beginning as a lightning strike weeks earlier, the Bear Fire was initially of little concern. Located in a steep locale, firefighters were directed to the larger and more dangerous movements of the Claremont Fire, another lightning strike.

But as the Bear Fire gradually grew and then high winds fanned the flames, the fire exploded and raced up and down mountain slopes devouring timber and any structures left unprotected in its path.

As a strike team leader in the area of a Bucks Lake development, White said crews worked to pre-plumb and lay thousands of feet of fire hose to and around homes not just in the Highlands area, but around all structures within the area.

With the North Complex of fires at “254,000 acres and some change,” White said firefighters were stationed at strategic points throughout the area. And as part of those preparations the hose begins at the start of each driveway that is pre-tagged and signed, explained structure protection trainee Jim Mitchell.

As crews laid hose earlier they also tied lengths of bright pink plastic ribbon and bright yellow signs indicating each driveway throughout the structure protection system. Should the fire spread to one of the developments or homes around Bucks Lake, engine crews could readily identify the markers even in thick, dark smoke. The yellow signs were to be completed by someone on each engine indicating important information about that area.

Besides signage, crews also added large orange water bladders at strategic locations throughout the development. These are filled to capacity by water-tenders and are available as engines require additional water as needed.

The Highland development is of particular interest to Bucks Lake Fire Chief Jeff Iversen. All homes within the area are off the grid, meaning each has its own solar energy, water and sewer systems and has been prepared to meet firesafe preparedness regulations.

Additional water within especially the Highlands development is essential, Iversen explained. Traditionally water in is short supply in this development that is several miles away from the lake.

Within the Bucks Lake Highland development structure protection crews have marked each driveway with a bright pink bit of ribbon, a communication sign and an American flag. This information is essential in the advent that the Bear Fire should approach or threaten the development that engine crew can identify driveways in heavy smoke.

Iverson also pointed out a green fire/rescue engine the department had acquired. Equipped with safety foam, he said the vehicle came in handy as helicopters scooped water out of Bucks to drop on the Bear Fire when the skies were clear. That Friday, the air was thick with smoke, as it was throughout the region, grounding all air operations.

On a drive through the development last Friday, Kye Funk with North Complex public information efforts, pointed out some of the firesafe features around structures.

It was immediately apparent that timber and brush had been cleared back from structures. And labeled water storage containers were ready for just an event like the Bear Fire or another disaster. Homes within the area also sported metal roofs.

At one stop along the way, Funk introduced Tyler Dixon another battalion chief with the Los Angeles Fire Department and with strike team 1003A.

Dixon said that he and the crews work 12-hour shifts that begin early in the morning. Traditionally firefighters are assigned to 16-day deployments when needed. This time, because of the vast number of fires, some of the people had been out longer and then joined this team for additional duty.

Dixon said that their days are actually quite busy. His strike team would get up early, leave the fairgrounds in Quincy following breakfast and wouldn’t return until that night. Once the fire is controlled, and as a final detail, crews will work to gather up the hose and return it to the fire camp at the fairgrounds.