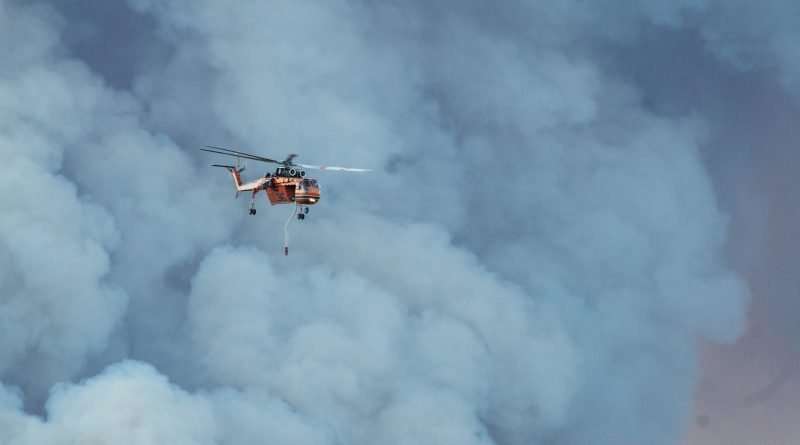 A helicopter responds to the Fly Fire the evening it broke out July 22. The blaze drew an intense air attack response. Photo by Joanne Burgueno
News
July 24, 2021 Editor

The Fly Fire, which broke out at around 5 p.m. on July 22 demonstrated extreme fire behavior overnight, as did the Twain portion of the Dixie Fire. The area near Twain started as a spot fire from the Dixie; the Fly Fire is not a spot fire, and the official cause is still under investigation.

Dennis Burns, the fire behavior specialist for the East Zone of the Dixie Fire, updated both areas of the fire this morning, July 24. He said that though the Fly Fire exhibited extreme fire behavior overnight, it did not push toward Quincy. In an earlier briefing today, fire officials feared that it could reach Mt. Hough within the next 24 hours.

The Twain portion of the Dixie Fire, which also showed extreme fire behavior last night, “continues to back down to Indian Falls,” Burns said.

The Dixie and Fly fires are predicted to be under an inversion layer until noon which helps calm the fire. Once the inversion layer lifts, Burns predicts that extreme plumes will develop.