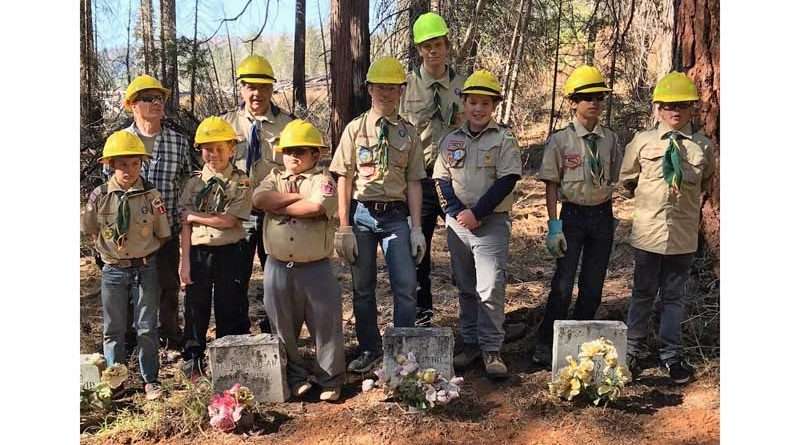 The old Seneca Cemetery received a facelift courtesy of Plumas National Forest employees and Boy Scout Troop 130 from Quincy. The pioneer cemetery is located in a rural part of Plumas County near the historic mining town of Seneca.

In addition to being overgrown with grass, shrubs and trees, the 2012 Chips Fire burned through the cemetery, leaving a mix of burned and dead vegetation that badly needed to be removed. Led by Joe Smailes, supervisory forester for the Mt. Hough Ranger District, the late-fall project was jointly planned by the Scout troop and the Forest Service.

Jordan Herbert, 16, past patrol leader of Troop 130, selected the project to meet the required community service project work for his Eagle Scout rank, the highest rank attainable in the Boy Scouts of America program.

Jace Brown, former resident of Seneca, presented a historical perspective of the cemetery and surrounding area of Seneca to the volunteers while PNF Archeologists Dan Elliot and Cristina Weinberg provided guidance as to the best areas for material removal and creating piles in order to avoid disturbing gravesites.

The 32 volunteers clocked in 259 hours cutting and stacking piles of woody debris across an acre of land. Firefighters will burn the piles at a later date.