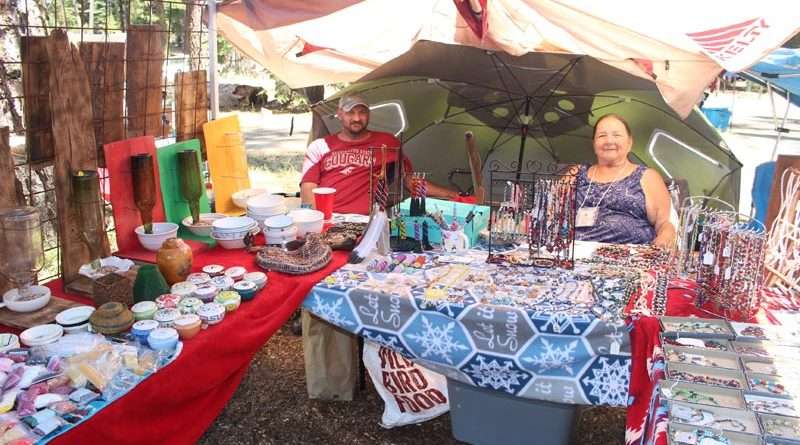 John Moore and Maidu Summit Consortium board member Lorena Gorbet are one of a number of vendors selling their wares at the 2019 Friends of Humbug Valley Gathering and potluck at Yellow Creek Campground July 27. Photo by Stacy Fisher
News
August 7, 2019August 14, 2019 Stacy Fisher, Staff Writer

Celebrating the transfer of Humbug Valley (Tásmam Kojóm in the Maidu language) later this year — and soon other parcels of ancestral lands around Lake Almanor next year — back to the Maidu Summit Consortium and the Mountain Maidu people after a long 16 year process, the 2019 Friends of Humbug Valley Gathering and potluck at Yellow Creek Campground may have been the most attended gathering yet.

The July 27 potluck was a perfect example of the long-standing tradition of the Maidu reaching out to the wider community, and of their hospitality and inclusion.

Working tirelessly in collaboration with PG&E — prior owners of Humbug Valley — as well as local and state agencies, the Maidu Summit Consortium sought to ensure a brighter future for the next generation of Maidu people through its efforts to allocate in perpetuity the 2,325 pristine acres of meadows, year-round streams and a number of natural springs in the Sierra Nevada wilderness.

Many local volunteers support the work being done by the Maidu Summit Consortium in order to acquire, protect and enhance important ancestral sites.

The Friends of Humbug Valley Gathering at Yellow Creek Campground is an opportunity for the Maidu Summit Consortium, officially formed in 2003, to thank all past, present and future members in surrounding communities for their continuing support.

This annual event recognizes the many years of hard work required to convey Humbug Valley to the descendants of its original inhabitants.

The Pacific Forest and Watershed Lands Stewardship Council — or simply the Stewardship Council, a special group of dedicated donors comprising public interest stakeholders concerned with land and water conservation — was formed as a private nonprofit in 2004 as a result of a PG&E bankruptcy settlement, according to Heidi Krolick, Stewardship Council executive director.

As part of the settlement, the Stewardship Council has played a crucial role since its inception in facilitating the reacquisition of Humbug Valley, along with 641 additional acres of ancestral lands consisting of five parcels located around Lake Almanor.

Despite the impending change of title of Maidu ancestral lands, there remains a host of concerns that have been identified by Maidu Elders, as the Maidu seek new ways “to provide improved opportunities to the youth of our community, … including the need for the next generation of young people to reconnect with cultural practices and intergenerational learning forums that our forests, meadows and canyons provide,” according to literature provided by the MSC’s local Chester office.

Furthermore, “Our duty is to build a network of empowered young Mountain Maidu culture carriers to help lead this work,” which can only be “achieved by granting our Elders the freedom to access natural resources they understand so well,” so that they may pass on their knowledge.

Descendants of the Mountain Maidu still flock to Tásmam Kojóm to this day, where the valley was and continues to be home to many Maidu people in the region.

Shortly before lunch was served, Maidu Summit Consortium Executive Director and keynote speaker Ken Holbrook shared information to the hundreds of guests present on the reacquisition of Humbug Valley and eventually other tribal lands being returned to the Mountain Maidu people after several years of committed effort.

Maidu Elder Frank Mullens spoke to the crowd of attendees about his experiences as a youth in Humbug Valley as a deer hunter, his stint in the U.S. military as a marine, and also gave an invocation in which he mentioned the Creator and said that, “We all must live together in harmony with a joyful spirit,” further acknowledging that, ”We are stewards of this land.”

Ricky Prows, Maidu Summit Consortium board member, gave a brief talk that gave mention to the historic fact of the Indian genocide that occurred in a previous era, but was quick to add that in this modern age the Maidu people look forward as always to a new and brighter future for generations to come together with the wider community.

Author and prior vice chair of the Maidu Summit, Beverly Ogle, who has been working most of her life to return the Humbug Valley to the Maidu people, was also in attendance.

Before lunch was served, kids had fun jumping into Yellow Creek that runs alongside the campground site where the event was held.

Part culinary affair, the festivities included quite a number of varied dishes lined up on tables under canopies for guests to enjoy, which lasted until mid afternoon.

Besides the opportunity for guests to learn about Mountain Maidu culture and history, a number of vendors were on hand, plus a drawing was held with multiple prizes like hand-woven baby baskets, along with guided local hikes, and other activities including axe throwing and demonstrations on “flint knapping,” the shaping of flint or obsidian to create arrowheads.

Also shown to guests was how to make an “atlatl,” essentially a stick with a handle on one end and a hook or socket that engages a light spear or “dart” on the other. The flipping motion of the atlatl propels a light spear much faster and farther than it could be thrown by hand alone.

Les Hall, MSC board vice chairman, said this was an especially happy occasion for the Friends of Humbug Valley and the Maidu people, given that the valley is currently in escrow with conveyance of the land expected by year’s end.

“We want to thank the wider community for its support in our endeavor to reacquire our lands,” said Hall. “It’s been a long process and we look forward to starting a new chapter in our history.”

Hall said he expects the yearly event will continue year-after-year, and that there is always plenty of room for more people to come and join in the annual festivities.

“Even though we are finally receiving the land back, we are always in need of further support,” to help in the MSC’s stewardship of Humbug Valley, as well as other parcels yet to be acquired.

According to Holbrook, the Maidu Summit Consortium is a nonprofit organization representing nine member organizations of the Maidu Indians of Lassen and Plumas counties, in their united quest to protect and steward their traditional homelands.

Hall added that, “By promoting stewardship practices with improved wilderness management methods, the Maidu seek to enhance the environment for all who share it.”

To donate go to: www.maidusummit.org. Information on the Stewardship Council can be found at: www.stewardshipcouncil.org.