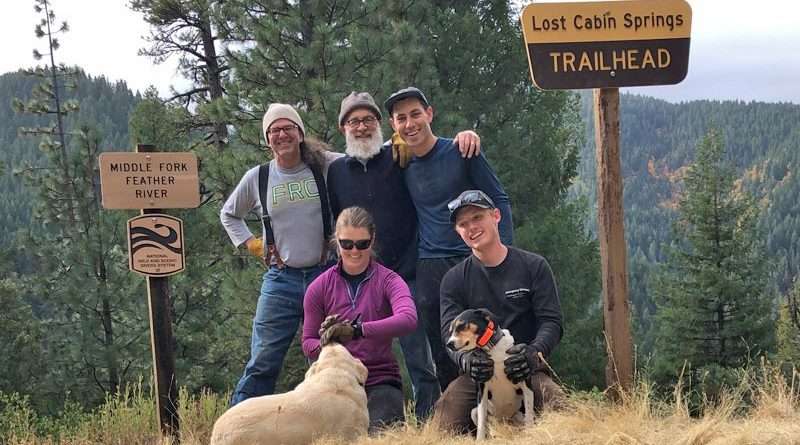 Friends of Plumas Wilderness volunteers, top from left: Will Lombardi, Wayne Cartwright and Evan Horne, and kneeling from left: Trinity Stirling and Andrew Murphy pose for the camera after installing signs at local trailheads in the Middle Fork Feather River area this fall. Pups Scout Stirling and Cali MurphStir came along for the adventure. The signs help increase awareness of the Middle Fork as part of the national Wild and Scenic Rivers system. Photo by Trinity Stirling
News
November 6, 2019 Roni Java, Staff Writer

With willing hands and sturdy hiking boots, volunteers from the nonprofit Friends of Plumas Wilderness (FPW) regularly take to the trails and pristine lands of our local rivers and forests. If there’s a need, they gladly offer their support — and shovels or post-hole diggers when necessary.

This year, their project list has included several half-day hiking adventures into areas of the Middle Fork Feather River. Each time, they set off with a mission to raise awareness about the Middle Fork’s important status as one of America’s federally designated Wild and Scenic Rivers.

The volunteers have installed special signs that read “Middle Fork Feather River — National Wild and Scenic Rivers System.” It’s a project they’ve been involved with as part of their partnership with the ranger districts of the Plumas National Forest.

Each volunteer signed up knowing the trips would involve hiking up to 6 miles carrying tools and signs. Work gloves, sunscreen, gorgeous views and positive attitudes helped make the trail maintenance activities into fun days with like-minded souls, according to FPW’s Trinity Stirling, who serves as vice president for the Meadow Valley-based environmental stewardship organization.

FPW has installed the signs at various trailhead locations, such as Oddie Bar, No Ear Bar, Bach’s Creek and Lost Cabin Springs, to name a few.

Last year was the 50th anniversary of the 1968 National Wild and Scenic Rivers Act. The Middle Fork Feather River was on the original designation list receiving that inaugural recognition. Many more waterways have been added since and FPW members remind us that this achievement was hard won. Talk to them and they’ll affirm it’s also worth celebrating every day because of the protections afforded a 77-acre-plus stretch and environs of the river.

More local waterways could be eligible for future wild and scenic designations, according to FPW President Darrel Jury who said the group is promoting public support for such an effort.

In the meantime, FPW always welcomes volunteers and next time you’re out in our wild places, look for the scenic rivers system signs and you’ll see the handiwork of your fellow Lost Sierra neighbors and friends.