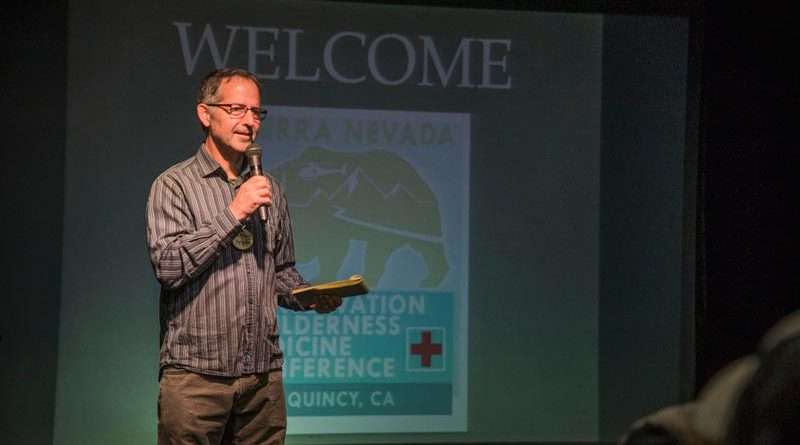 It’s not a typical stuffy medical conference — not when mountain biking, kayaking and rock climbing are built into the agenda.

The second annual Sierra Nevada Conservation and Wilderness Medicine Conference was held in Quincy from May 31 to June 2, with 92 attendees coming from throughout the state and across the country.

“They like the casual vibe, but there are quality speakers with rigorous science,” said Dr. Jeff Kepple, co-organizer of the event.

He and Dr. Zina Semenovskaya co-founded the event last year combining their enthusiasm for medicine and the outdoors.

Once again the event was headquartered at the West End Theatre, and Kepple said the presence of the Quintopia Brewing Company adds to the relaxed atmosphere of the conference.

Speakers were informative and entertaining, and many such as Dr. Michael Lindsey returned by popular demand. His lecture on bites and stings was accompanied by a creative Photoshop presentation that imparted important information on what to do when confronted by a bear or a bunch of bees, but left the audience laughing.

Other lectures included one from Quincy High alum Dr. Stacy Rotta who spoke about burn injuries in the wilderness and other resource-limited settings.

Dr. Steven Zell discussed the impact of climate change on migration and health, and how its impact will change what doctors will be seeing in their practices and emergency departments.

In all, conference goers could attend 15 sessions and three workshops. The latter included lifts and carries, wound care in the wilderness and using mobile ultrasound devices.

For Truckee health care providers Christina Campbell and Jeanne Plumb, this was their second conference. “It was even more organized and dynamic this year,” Campbell said.

She was also very impressed with Saturday night’s expert panel on wildland fires.

Plumb learned that “No one is safe in California,” but she was impressed by how “multiple agencies seemingly come together” to address the problem.

Kepple, too, was impressed with the fire panel and shared Plumb’s assessment. “There is more consensus than I actually thought. There is nothing like absolute urgency and calamity to bring us together.”

The discussion proved so popular that it didn’t conclude until about 10 p.m.

The conference boasts a full agenda that kicks off at 8 a.m. and lasts late into the evenings. Some of the registrants camp at Feather River College and can return to their tent area to enjoy a bonfire.

Complimentary breakfasts were provided by the Quincy Volunteer Fire Department and Jose’s tacos of Greenville. Kepple thanked those entities, as well as daughter Clare for making cookies and power bars for the attendees.

As this year’s conference drew to a close, Kepple announced that the third annual conference had already been scheduled for June 5-7, 2020, and early registrations were being accepted. Twelve signed up and paid a deposit.

The conference has proven popular not only with health care providers, but with individuals who have an interest in conservation and the environment, and who are outdoor enthusiasts since much of the information is applicable.

“As a non-medical attendee, I couldn’t have been happier with both the accessibility of the presentations and the depth of the content,” said local resident Graham Shea. “Much of what was presented was very valuable to me merely as a Quincy local interested in recreating and preserving our natural resources. But I also learned many things that will help me as a search and rescue volunteer.” He cited what to do in bear encounters and sports injuries, to hands-on workshops in suturing and mobile ultrasound, as examples.

“I was blown away by the broad scope and exciting usefulness of everything in the program. I hope more non-professionals realize what a gem of an opportunity we’re getting and attend next year,” Shea concluded. “I got to ask experienced doctors all my burning questions about outdoor recreation and health.