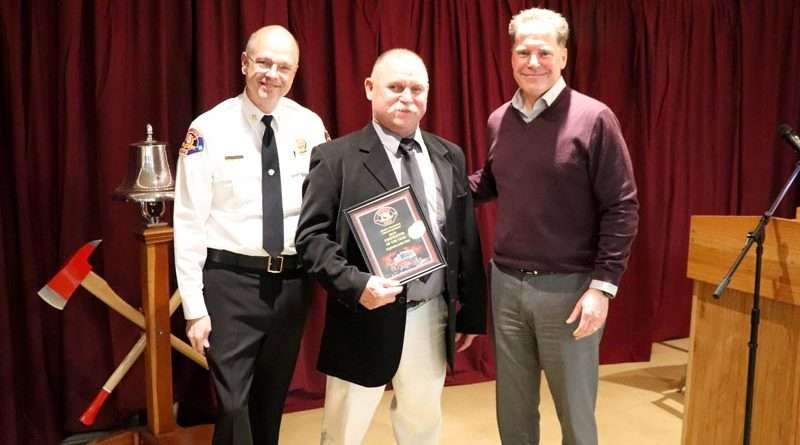 Every February the members of the Quincy Volunteer Fire Department select one member who best embodies the mission and values of the department to receive the coveted Firefighter of the Year award. And, for the second time since joining the department in 2011, that honor this year again went to Captain John Gay.

In making the presentation Ryback said, “Gay’s peers will tell you that he is the poster child for what it means to be a Quincy Volunteer Firefighter. He is the face of community service, not just with Quincy Fire but with his church, the schools, the food bank and anywhere else he is needed.

“His patience and dedication are unwavering. Any time, day or night, he makes himself available to help new firefighters become familiar with the department’s fire stations and equipment,” Ryback said.

Fire Chief Robbie Cassou said Gay has a passion for sharing his vast knowledge and experience. “Every moment is a teaching moment when he is around. The classes he teaches are packed full of information and his command presence demands their full attention.”

Cassou added that no matter how devastating the incident is, or how inexperienced a crew member might be, Gay always keeps the team out of harm’s way and brings them home with a wealth of new knowledge and experience.

After retiring in 2011 from more than three decades in fire service with the Forest Service, Gay joined the QVFD and just a year later was honored for the first time as the department’s Firefighter of the Year.

The 32 volunteer firefighters and the eight members of the support team were recognized at the installation banquet for their many contributions and dedication to both the department and to the community. As a group, in 2019 they invested nearly 6,000 hours of their own time on emergency calls, training, community outreach programs, and other volunteer and fundraising activities for the department.

The QVFD responded to 624 emergency calls in 2019. As he has for years, Gay topped the list going on 367 of those calls followed by Deputy Chief David Windle with 249 calls and Captain Kevin Correira with 204.

Both Gay and Cristina Weinberg, now retired as a firefighter but a member of the department’s support team, were recognized for personally increasing by more than 50 the number of calls they made this year compared to the previous year.

Kevin Griffin, QVFD’s Support Team leader, presented Kim Eliason and Tracy Weaver with the 2019 Support Team Member of the Year award. He recognized both for their dedication to the team’s ongoing training programs along with their exceptional dependability in responding to emergency calls, which made it an easy choice for the two to share in this year’s honor.

Recognizing their time with QVFD, service pins were presented to Robert Pierson, who has been with the department for 45 years, and Tony DeMartini, for his 40 years of service. Matt West, Correira and Dale Ready were recognized for five years of service as were Support Team members Megan Leonhardt, Jeff Souczk and Weaver.

In addition to the department’s 37 volunteer firefighters and support members, it has a paid staff of three that includes Chief Cassou, Administrative Secretary Karrie White and Charlie Read, facilities manager and mechanic.

The department is always looking for volunteers to become firefighters or a member of the support team. Chief Cassou encourages anyone interested in learning how to become a part of this family to talk to him or with one of the department’s other volunteers or staff.