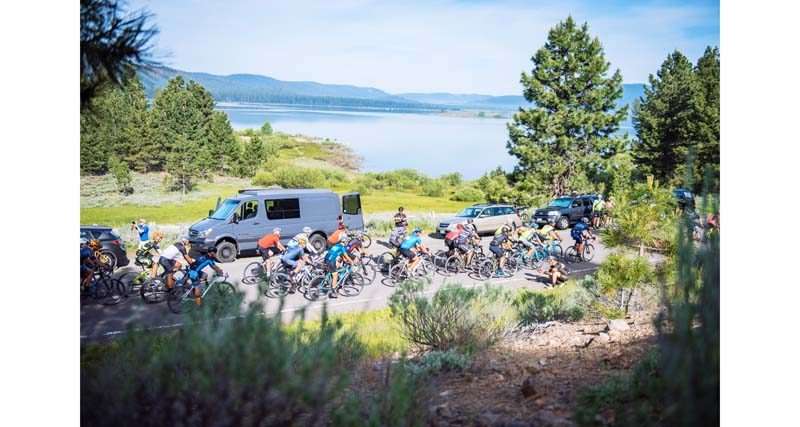 Riders at the 2016 Gravel Grinder flew over winding roads, through the forest and past breathtaking vistas as they rode the mixed-surface route that combines riding on dirt and pavement. Photo by Ken Etzel
News
May 27, 2017May 25, 2017 Lauren Westmoreland, Staff Writer

Nine hundred people have already signed up to get lost in the Lost Sierra at the upcoming Lost and Found Gravel Grinder bike race around Lake Davis on the weekend of June 2 through 4, with race day Saturday, June 3.

Mark Pecotich, Sierra Buttes Trail Stewardship Tribe Development coordinator, said with much enthusiasm and excitement, “This is an event that just keeps growing in popularity. The race is a mix of riding on dirt and pavement, and it appeals to a variety of folks depending on their personal athletic ability.”

This is the fourth year that the race will be held at Lake Davis, and while the mountain views and wildflowers may stay the same, riders come back each year to a slightly different race route.

“Last year’s route is completely impassible,” Pecotich said. “The route this year is at a lower elevation, and permits with the National Forest Service allow us to change the route, taking riders into different parts of the Lost Sierra. We like the idea of making the race fresh and new each year.”

The event is capped at a maximum of 1,000 riders, and with 900 slots already filled, Pecotich expects this to be a sold out event.

“With all of the friends and family that come along, we are estimating an overall attendance of 2,500 to 3,000 people,” he said. With such a large influx of visitors to the area during the event, Lake Davis campgrounds were soon filled, and Pecotich noted, “The city of Portola has really stepped up with support this year, and we are so appreciative.”

The city is allowing campgrounds at city parks for overflow campers during the event weekend. Portola has also put together a festival-style lineup at the city park, with live music, drinks and a new pump bike track for rowdy riders.

“The partnership between SBTS and the Forest Service has been amazing,” said Pecotich. “We are so thankful to all that come together to make this happen. Attendees can look forward to bigger, better aid stations on the ride, as well as a beer garden at Lake Davis and a lunch at the end of the ride on June 3 prepared by Magic Mountain Catering.”

Cycling enthusiasts attend this event from far and wide, as Pecotich found recently in his own experience when visiting a Portland, Ore., bike shop.

“It was so interesting. When I went into the shop, I asked if the people there had ever heard of the Gravel Grinder and to my surprise, found that not only did they know about the race, but that the shop has been sending people our way to attend.”

SBTS workers have been out in the woods, clearing trees and checking out the routes to ensure all is ready for the riders, and the plethora of details necessary to bring together a large event like this are close to fruition.

“Shortly, we will be going to the Forest Service with our operating plan, which has all of the final details such as exact placement of the aid stations, logistics with medical aid, details like that. After we get the stamp of approval, it’s time to welcome the riders to the Lost Sierra,” Pecotich added.

Those interested in learning more about the race can visit lostandfoundbikeride.com.