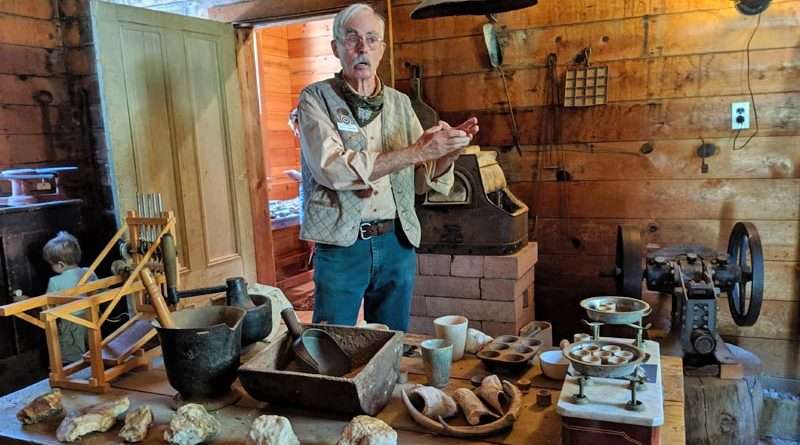 Rich Clemons, a volunteer and docent at Plumas Eureka State Park, explains the assay process and the various ways to mine ore in the quest for gold. Photo by Lauren Westmoreland
News
July 31, 2019August 2, 2019 Lauren Westmoreland, Staff Writer

The annual festivities kicked off Saturday morning with a special guided trek through the wilderness to the original gold discovery site, where miners first found gold in 1851.

Back in the historical district, families and children of all ages were set free to explore, with clanging hammers and the slightly sulfurous smell of the smithy balanced against the backdrop of the forest and the gold panning trough crowded with eager young prospectors, pans in hand.

Volunteers wearing period garb led traditional children’s games on the Park green, along with a hands-on class in candle making. The art of spinning wool was displayed under the trees for those interested in traditional textile arts.

One such spinner, Lorraine Nielsen, demonstrated her work on an antique Great Wheel from the 1800s, explaining as she paced back and forth behind the wheel that the “walking wheels” were common for spinning prior to the treadle spinning wheels that are still in use today. “Imagine the great amount of physical activity used to spin with this wheel,” Nielsen exclaimed. “It was easy to walk 30 miles a week, just spinning.”

Families trailed up the hill and explored the historic Assay Office, where docents greeted everyone with a smile and a wealth of information about the assay process.

“Assaying is the process of determining the amount and type of metal in an ore sample,” explained docent Rich Clemons, as he gestured toward the antique equipment laid out on a sturdy wooden table in the office. “Based on the results of an assay, the value of a mining property can be established or the selling price for mined ore can be set.”

Outside of the Assay Office, volunteers worked with children to craft their own wooden “mining lanterns” with basic hand tools, giving kids a chance to get hands on with history.

Docent Dennis Black demonstrated the way to shave the wood safely, with curls of wood falling to the ground as the project took shape, eager children working to carefully follow directions with much concentration.

The Graeagle Lions Club worked at the hot barbecue grill to serve up any and all comers who felt the need to take a break and enjoy a meal, while others continued on to tour the Moriarty House, a historic miner’s residence.

The Moriarty House brought group after group through a small wooden home, complete with period-correct memorabilia, with the kitchen laid out as if a mining family had begun to prepare a meal and stepped away for a moment.

“Quite large families used to live in a house this size,” docents noted during the tour, with many laughing as it became apparent how crowded the home would be with a large family.

Docents went on to explain some of the details of life in Johnsville in the gold-rush era, touching on details from the lack of electricity to the grueling work it took to sustain a family, especially a large family, in those days.

Bruce MacGregor, author of a book titled “Plumas Eureka on Glass,” returned to display excerpts on the history of Johnsville, and in a special visit, descendants of the one and only William Johns came together for a family reunion.

In 1873, the mines at what is now Plumas-Eureka State Park were put under the management of a man named William Johns, who was recorded as a brilliant manager of mining operations, and over time, increased the efficiency of the mines, and in less than 10 years, the London investors had their original investments returned and shares of the company increased in value.

Johns planned and built a second stamp mill, the Mohawk, a 40-stamp mill completed in 1878. As occurred with the Eureka Mill, a town was quickly organized to lie adjacent to the mill.

Johns planned out a site in 1876 and a man named John Banks came from Jamison, claimed land, and built the first building, a hotel, in the town that was first called Johnstown.

The Johns-Ford family was met with many eager to shake hands with the descendants of the Johnsville namesake, with photos taken for posterity.

Early Sunday morning, the Rotary Club of Portola set up sizzling grills under the towering trees, serving up a hot pancake breakfast, as many filled the long picnic tables again and again, enjoying a meal set to the sound of live music played by Clinch Mountain.

Families took turns taking photos dressed in period clothing, Rick Joy’s beautifully matched pair of horses returned for another year of wagon rides, and the Plumas Ski Club encouraged all attendees to return to the park and experience the Lost Sierra in the snow, with the annual longboard ski races this winter.

“This is event is really about giving back to the community and bringing history to life for the kids,” Tim Hardie, PESPA president said with a smile. “We are happy to do this and have everyone here!”

Event mobilizer Nancy Degger wants to thank all of the volunteers involved in bringing this event together, as well as the vendors that attended the event. Degger added, “Many thanks go to the State Parks maintenance crew for getting all of the heavy lifting done, I am overwhelmingly grateful to them!”

Finally, event organizers said, “We would also like to thank the generous local merchants who donated to this event.”

The next event at Plumas Eureka State Park is the only fundraiser held by PESPA, an event called Dinner in the Park, to be held Thursday, Aug. 15. For more information, contact Nancy at 927-9748.