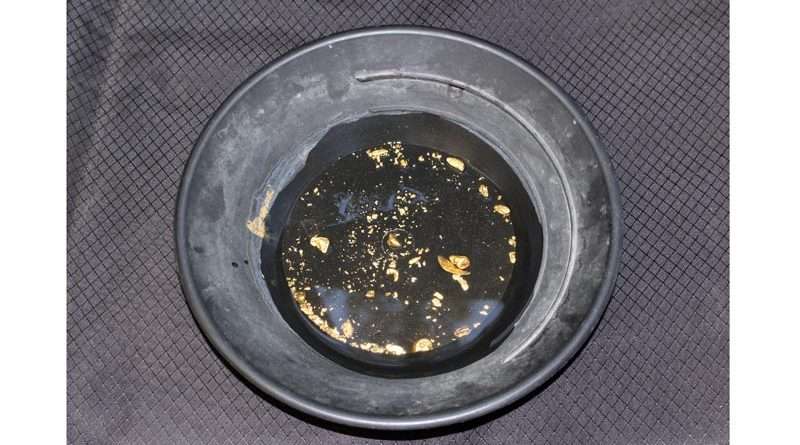 We don’t really need to unlock the mystery of the origins of gold when we’ve already identified an asteroid — Psyche 16 — taking up residence between Mars and Jupiter 466 million miles away worth $700 quintillion in precious heavy metals including gold; enough gold in fact to net every single person on the planet close to a trillion dollars.

A less daunting challenge for the earth-bound prospector and veteran miner is the opportunity to settle for more accessible deposits closer to home, in the streams of the Northern Sierra.

If you have an interest in prospecting, where do you go to get detailed information to your questions on acquiring gold claims?

Watson has served as a consulting geologist for over 30 years, and maintains a close professional relationship with the United States Geologic Survey (USGS), a scientific bureau within the Department of Interior.

A major part of the business of Advanced Geologic is providing mineral mining claim permits to prospective amateur prospectors, professional miners as well as to large corporate gold mining operations.

Another one of his responsibilities, Watson said, is using his substantial geologic knowledge to let landowners know whether they have anything of worth on their properties in terms of precious metals.

“California is blessed with large amounts of gold,” he continued, explaining that volcanoes create gold deposits through “a complicated process of mineralization of gold particles from superheated steam driving through fractures,” where the rare metal is then transported “into concentrated gold veins that might later be exposed through erosion” which also plays a role in freeing gold nuggets from the rock and “depositing it into streams.”

In other cases, “gold is disseminated directly into the surrounding rock matrix by hydrothermal activity” and is recovered by “processing large amounts of quartz rock in huge mining operations.”

As a hobby, panning for gold can be a lot of fun for individuals and family members, he said, spending a day picnicking or camping alongside a creek while prospecting for gold flake as a way to enjoy the sunshine — and perhaps make some modest coin on the side.

From a historic perspective, “Gold wasn’t all that valuable in the American Old West until the mid 1800s,” when gold was first “discovered” in Sutter’s Mill at Coloma in 1848 by 19th-century pioneer John Sutter, sparking the California Gold Rush, and the arrival of some 300,000 immigrants hoping to strike it rich.

“Before then silver was considered more valuable because it was used in a wider variety of items” like silver tableware, noted Watson. Silver was also more readily found, “while gold was far more scarce and harder to process.”

Gold was difficult to extract, he continued, the conditions arduous and the rights of land ownership still not entirely worked out in a legal sense. Any gold that was discovered had to be returned to the government or landowner.

Eventually, once people learned to work with gold and made gold objects, the metal took on more value, he said.

During the time of the Old West when California became a state in 1850, “Mexican miners found they had no rights to their claims” and were pushed aside, yet by the 1860s there was still no way to officially own the mineral rights to the land. The United States government and the state of California owned the land within its borders, complicating the problem of who could actually make a claim.

“At one point a brigadier general who was charged with keeping the peace after numerous clashes between prospectors turned deadly, proclaimed that anyone who found gold on federal land could keep it. And that was a first anywhere on the planet.”

It took an act of Congress to create the General Mining Act of 1872, enacted by the 42nd United States Congress that authorized prospecting and mining for economic minerals on federal public lands, such as gold, platinum and silver, awarding individuals any number of claims of up to 20 acres in size and anywhere from 1,500 feet in length and no more than 600 feet wide per claim.

“People have been mining in the Northern Sierra for many generations over the course of 140 years,” he said. “If there was gold to be found in our creeks and rivers, most likely someone has been there before.”

Nevertheless, gold still remains in drainages within Lassen, Sierra and Plumas counties, Watson noted, and now it is worth a whole lot more than back then.

Because commercial gold mining requires a contingent of heavy equipment, California law has been quite strict in recent years on what machinery can legally be used in such endeavors.

A statewide moratorium was passed in 2009, when California prohibited the use of suction dredges to recover gold in streams.

Suction dredging utilizes a high-pressure water pump to suck up water, gravel and gold from the bottom of the river that then injects this material into a sluice box.

What is allowed for small mining operations with a permit is the use of excavators, bulldozers, backhoes and motorized sluice boxes; an artificial channel for conducting water, often fitted with a gate at the upper end for regulating flow.

There are changes underway however, Watson noted. After a long legal battle, “The state must now issue suction dredge permits” that were previously prohibited, but added that new administrators to the California State Resources Water Quality Control Board aren’t expected to issue permits allowing suction dredging until sometime in 2020.

Watson stated that, “Today there is a mini gold rush that started in 2002 and then picked up in 2009 when the Great Recession hit the economy hard and the price of gold skyrocketed in response to economic uncertainty and other factors such as a weakening dollar.

Watson confided that, “Gold mining isn’t easy, you will break a nail,” but that, “If you get out there and work a decent claim,” an amateur prospector “can make more money than working at a retail chain.”

Serious gold seekers have the opportunity to come to Advanced Geologic to view a list showing what claims are available for purchase. Then through a somewhat complicated legal process — if gold or other valuable mineral is discovered — a “notice of location” is attached to a post that is literally erected on the ground in a mound of rocks (technically a “discovery monument”) and the claim is then submitted to the County of Record and with the Bureau of Land Management in an official filing.

This is where Advanced Geologic comes in. “We carry a suite of mining claims all over Sierra and Plumas counties and in most of the western states where we’ve found valuable minerals on land that we’ve claimed legally that we will sell to clients,” he said.

Details on how to file your claim and the correct order of steps needed along with how to fill out the proper paperwork are explained by Watson by appointment.

“To prospect for gold you have to have a keen eye to see the signs, not only in current river channels, but in previous river channels as well as where waters once flowed.”