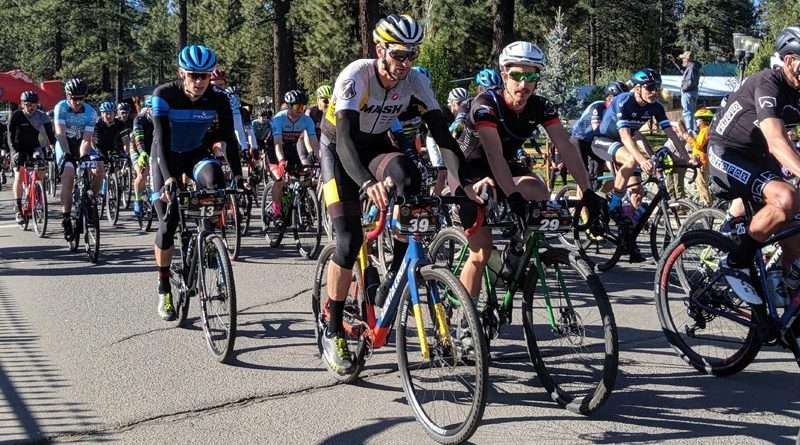 The unusual sight of RVs and tents spread out in campgrounds throughout the city is the first thing that met the eyes of Portola locals as bicyclists took over the city for the weekend of the Lost and Found Gravel Grinder.

The early morning air was charged with excitement as thousands milled around South Gulling Street on bikes, with flashy and humorous jerseys popping with color against the backdrop of towering trees on Saturday, June 1.

Participants and spectators alike came from places as far as Canada and beyond to get “lost and found” in the Lost Sierra, and after a week of wet weather, the day seemed to herald the return of the sun as it shone down in a nearly cloudless bright, blue sky.

With 1,600 riders lined up behind the Clif Bar start and finish line on South Gulling Street at 8 a.m., Johnny Walker of Quincy played a heartfelt rendition of the National Anthem on harmonica, the notes echoing off of the mountains and visibly bringing mist to the eyes of many.

Cowbells and cheers echoed as the first throng of bicyclists moved en masse over the bridge toward Highway 70 led by Sierra Buttes Trail Stewardship (SBTS) volunteers on dirt bikes, truly a sight to see as the number of bikes quickly appeared to outnumber the vehicles on the road, moving toward Forest Service land, where much of the race took place.

“I ended up riding the 100-mile course, and it truly was a day to remember. So beautiful out there, especially right now after a big winter and all the rain we’ve had. The wildflowers are in full bloom. I highly recommend getting out there if you haven’t already!” said Sierra Buttes Trail Stewardship Writer and Trail Whisperer Kurt Gensheimer.

This year’s course is already being touted as the best thus far in the seven-year history of Lost and Found Gravel Grinder races. One rider said, “I was very skeptical of the venue change, but you guys knocked it out of the ballpark with the logistics and the course. This was my fifth race, and so far, my favorite.”

Those waiting on riders to complete the 35-, 67-, and 106-mile routes, respectively, explored the City of Portola and surrounding areas, with many enthusing, “There were far too many spots to stop and take a tourist shot! We’ll definitely be back next year.”

Many spectators took advantage of the warm weather and enjoyed the Portola City Pool, while others sprawled on the grass at the City Park in the shade for some relaxation after visiting the Lost and Found Marketplace and grabbing both cool adult beverages and a hot meal from their choice of food truck.

Once riders began to roll back in, the park started to fill up, with racers getting free baths for their bikes at the Muck Off Station and then leaving the bike in a valet area so they could take advantage of the meal provided to riders and volunteers.

Popular area musician Jack Danny warmed up the crowd as the evening progressed, bringing local flavor to the stage and getting many to tap their toes as the Post-Ride Recovery party began to rev up.

Those grouping on the green to unwind and watch the awards being given to riders in each category of the race commented that they loved the change of venue to Portola from the lake. “There’s lots more room to sit around after the ride and get comfortable,” one rider noted, gesturing around the park.

As the sun began to descend, the Plumas County Sheriff’s Employee Association put on the kids’ bike race, with children of all ages doing their best to pedal hard and win trophies of their own behind the park, preparing for the day that they will be able to ride the Gravel Grinder themselves.

The day ended with a show put on by Bay Area group Afrolicious on the main stage at the Portola City Park, with hundreds forgetting the sore feet of the days’ ride to dance under the open skies of the Lost Sierra.

Feedback from attendees began to flood in immediately, according to organizers, with the majority enthused about the Gravel Grinder’s move from Lake Davis to the City of Portola. “This was my fourth Lost and Found 65 and the best,” said one individual. “Best route by far and the Portola venue is much better for lodging, restaurants, and phone service.”

Another rider exclaimed, “The town and people of Portola are nothing less than awesome. Everyone was super friendly and very welcoming of all the ‘dirt bag riders’ taking over their town. I feel like a dope for not discovering this area sooner, but better late than never. We’re already piecing together a ‘bikepacking’ trip around the lake and up into the nether regions of the Plumas National Forest. Can’t thank Sierra Buttes Trail Stewardship enough for putting on such a great event.”

From the SBTS point of view, the race was a total success. “I’ve been a participant and volunteer in quite a few Stewardship events over the years, but I think this year’s Lost and Found was one of our finest,” said Gensheimer. “All of the businesses seemed to be super busy. I think the participants saw and felt the enthusiasm the community had for the event, which put the overall vibe over the top.

“There were several elements which made it so memorable —‘the community truly embraced it as their own,’ ‘the courses — designed by Greg Williams —were the best Lost and Found courses yet,’ ‘starting and finishing in Portola worked great, the camping in town was terrific,’ ‘the weather was perfect,’ ‘the beauty of the backcountry terrain unmatched and the attitude of the participants was very positive.’”

Greg Williams, Executive Director at Sierra Buttes Trail Stewardship, stated how proud he was to see the community so supportive and for all to have the opportunity to enjoy such a beautiful place.

“Who knows, maybe they will come back and visit, or maybe come to live here,” Williams said. “There’s no way we could have pulled this event off up at Lake Davis. Doing everything in the City of Portola Park really added to the festival vibe, and I feel like this is an opportunity for Portola to have some real pride about itself.”

Williams described how over the years, his team has been able to learn a lot about the world of gravel racing and feels they are hitting their stride.

“We want to create a destination here and keep the attention in Portola,” he explained. “There are almost 5,000 miles of roads to be ridden in our Plumas Forest. Absolutely none of this could have occurred without the assistance of the United States Forest Service Beckwourth Ranger District. The USFS allowed permits for the race, and we are all extremely grateful for everything they do.”

Williams also gave a shout out to local resident Bob McGarr. “Bob is a private land owner, and he allowed us to cross his property to get under Hwy. 70. This was instrumental, and the community thanks him.” SBST also thanks the City of Portola for partnering up with the Stewardship to host this event, creating a relationship that all would like to see continue in the future.

Kudos were given by event coordinator Teal Stetson-Lee to the 150 volunteers that also turned out to make the event a success, helping to keep everything from traffic control and booth setup to registration and trash pickup.

The event is always held with the central purpose of the Sierra Buttes Trail Stewardship in mind, and attendees were enthused about the Stewardship’s work. “It cannot be understated what SBTS is doing for this community,” enthused one individual post-ride while waiting in line.

“This event is as much a positive boost for the community as it is a ride. If you haven’t read up about the Beckwourth Peak Recreation Project, do so and spread the word.Once built, this trail will be one of the more spectacular trails in the Sierra. The main driving force behind this project is helping the community through recreation.”

For SBTS, formed in 2003, the Gravel Grinder is a firm tradition, but the core vision remains the same – restore, maintain and build recreational trails that can be enjoyed now and by future generations. Williams is excited to continue the next big push in the “dirt magic”, or trail work on the Beckwourth Peak trail, saying that once completed, there will be 20 miles of world class trail waiting to be explored.

“Our goal has always been to reach 2,000 riders for Lost and Found, and after this years’ success at 1,600 riders, with the continued support of the community, I think we will reach that number next year,” Gensheimer said. With trails to be built and maintained, organizers and attendees alike look forward to next years’ race to see what else they can find at the Lost and Found in support of the trail work.