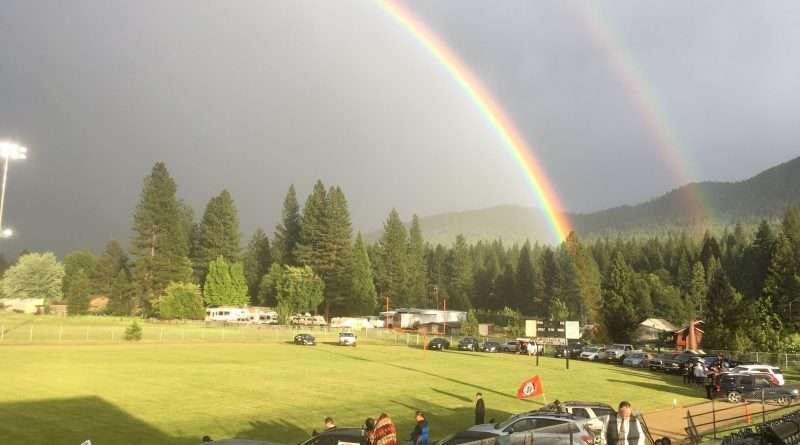 A double rainbow greets the GHS Class of 2020 and all of those who gathered in their cars to wish the graduates well and to support them on their final day of high school. Photo by Meg Upton
News
June 14, 2020June 16, 2020 Editor

After 91 days apart, Principal Traci Cockerill reiterated during her commencement speech that the Greenville High School Class of 2020 was briefly reunited — if 6 feet apart.

On Friday, June 12, GHS graduated its 13 seniors and gave the town a commencement address that some called “one for the books.”

At 5:45 p.m. the GHS gym parking lot was packed with students, their families and friends as they coordinated themselves into the backs of pick-up trucks and decorated cars. Friends and extended family drove around the football field, while seniors and other friends and family packed in to 13 vehicles, a single black chair at end of each car for each senior. It began to lightly rain.

The stage stood sparse with only the principal at the podium; Dave Keller, Indian Valley’s representative on the school board; and teachers Trey Farris and Judy Dolphin. Jim Norman and graduating senior Nick Hampton played music from high up in the bleachers with Plumas County Supervisor Kevin Goss on hand to emcee and read statements each senior made about their lives in high school.

Cockerill introduced the speakers for the evening with hand sanitizer and wipes for the microphone after each person got up to speak. Old traditions with a COVID19 twist.

Next Balbiani spoke, then Bustamonte, about the year and how it did not obviously go as planned but both graduates offered a bit of hope and best wishes for the class.

Judy Dolphin and Trey Farris each spoke to the graduates as well, with Dolphin pointing out in particular how her culinary students were about to compete when everything went down and how sorry she was that Pomtong and Balbiani would not get that opportunity.

GHS graduations usually double as awards ceremonies for scholarships. There is also usually a break in the ceremony for students to present those that helped them with roses.

This time around there were gift bags for the graduates back in the school building with envelopes with scholarships from local organizations and businesses. As the students and teachers reiterated: there was no prom, no senior trip, and no pops concert. The community therefore rallied with gifts for the seniors. Pheasants Forever, Indian Valley Christian Fellowship, Evergreen, Papenhausen Pit Stop, Heaven Scent, among others gave to the Class of 2020.

Toward the end of the ceremony a double rainbow appeared in the sky making a perfect backdrop.

As the students rose up from their spaced apart seats it began to rain again more heavily, but they were not deterred. When their names were called they received their diplomas and were cheered on with noise-makers and car horns. Then they did a final lap in their cars in the rain and left the field to the streets of Greenville where a parade of cars of their families and friends drove around downtown Greenville.