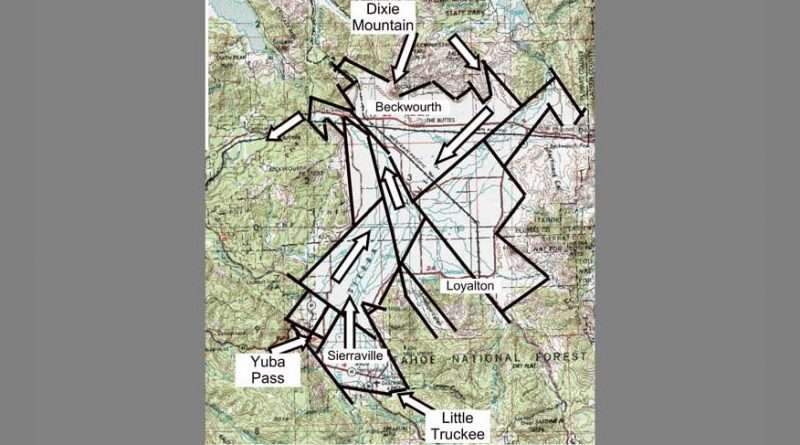 How do you study what you can’t see and a process that takes millions of years to play out?

Like a doctor who diagnoses your health based on knowing only your temperature, weight, and blood pressure, Burkhard Bohm diagnoses the health of groundwater based on only knowing groundwater levels, the ratios of stable isotopes, and the amount of minerals and dissolved solids in groundwater.

On Feb. 24, the Sierra Valley Groundwater Management District invited Bohm, longtime hydrology researcher and founder of Plumas Geo-Hydrology, to present the results of his many studies of Sierra Valley groundwater.

Pretty much the same story could be told about Mohawk, American and Indian valleys. Therefore, what is known about Sierra Valley groundwater will help other groundwater basins in the region.

Geology of the Sierra Valley

Beginning 17 million years ago, the mountains around Sierra Valley have gone up and the valley basin has gone down. This has occurred along the many faults at the edges of the basin.

At the same time, the valley was filled with horizontal layers of sediments eroded from the surrounding rising mountains.

From time to time, the speed of the rise of the mountains and the fall of the basin occurred faster than the basin was filling up with sediments. When this occurred, the valley contained a giant lake.

When surrounding glaciers were starting to melt at a rate faster than the waters could leave the valley, down the Middle Fork of the Feather River, the valley also contained lakes.

The last time a glacial lake occupied the Sierra, Mohawk and American valleys was from approximately 25,000 to 10,000 years ago.

Where does groundwater come from?

Water moves under the force of gravity. Bohm noted that groundwater just moves much slower than surface water, taking hundreds to thousands of years to come to the surface again, depending on how deep the groundwater goes.

High peaks and high passes often receive the most precipitation and the most snow. Snow is great at replenishing groundwater because, when it melts slowly, it percolates into the soil rather than running off a site right away.

The climate of Sierra Valley has always been wetter on the west side of basin than on the east side.

Bohm pointed out that most of the groundwater in the Sierra Valley comes from peaks and high passes on the generally western side of the valley and to the north and south.

Bohm believes that Dixie Mountain to the north, Little Truckee Summit to the south and Yuba Pass to the southwest are the main sources of groundwater for the Sierra Valley basin.

Much of this water enters the basin where groundwater and streams start to cross the faults at the edges of the basin.

Bohm pointed out that the basin does not receive groundwater from Lake Davis, which enters the Feather River downstream from the Sierra Valley.

Where does the groundwater discharge?

There used to be a lot of artesian wells in the Sierra Valley before irrigation began in the 1950s. Artesian wells are springs where groundwater rises to the surface under pressure without the need for pumping.

Groundwater temperatures at major recharge areas in the mountains average 50F. However, by the time that groundwater rises to the surface in the northwestern portion of the basin, hundreds or thousands of years later, its average temperature is 86F.

Why? Because if groundwater goes deep enough, it gets closer to hot magma a mile or so in the Earth.

Bohm pointed out that, in general, warmer groundwater leaches out more minerals than cooler groundwater, increasing the likelihood that undesirable minerals might find their way into warm groundwater.

The leaching of minerals also increases the longer that groundwater stays underground, in contact with rock or sediments, and the higher the pressure the groundwater is under.

Some groundwater is relatively shallow; this includes the water for most home wells.

Other groundwater goes very deep, is under high pressure and stays underground for much longer, warming in the interim before it discharges.

Thus, deep groundwater tends to have higher mineral content than shallow groundwater in the Sierra Valley.

Leached minerals can include minerals that are more soluble and show less of a relationship between temperature and the concentration of those minerals. These minerals include boron, carbonate minerals and salts.

Bohm noted that boron and arsenic  are found in high concentrations in some groundwater. Nitrate has increased through time throughout much of the valley.

Finally, Bohm confessed that his understanding of how groundwater moves to and through the basin’s sediments is incomplete. Bohm said, “This isn’t the end of the story.”

Besides faults around the edges of the basin, the basin is cut across with many other faults. He said he still doesn’t understand how those faults affect the movement of groundwater.

Bohm is looking forward to the presentation of a computer model of the hydrology of the Sierra Valley given by representatives of University of California, Davis, on March 29 somewhere in the valley. Computer models are another way of trying to understand groundwater movement.

One thought on “Groundbreaking groundwater study in Sierra Valley”