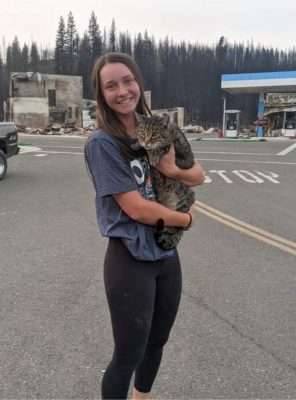 Feather River College student and softball player Ashlyn Bustamante and her family were forced to evacuate their home in Greenville because of the Dixie Fire. They  lost their home and everything they owned.

Ashlyn wasn’t able to locate her beloved cat, Tiger, and she feared that he was gone forever. But she never gave up hope and made daily trips to Greenville to put out water and food for Tiger, hoping he would find his way home.  Sometime later she saw a post on Facebook stating there was a cat living under the bank, which is one of the few buildings that survived. Ashlyn drove by the bank every day, and two months after the blaze, she drove by the bank and saw what looked like Tiger. She ran up to the cat, it was scared and ran under the building. After putting out food and calling the cat by name, Tiger finally realized that it was her owner calling and they were finally reunited!