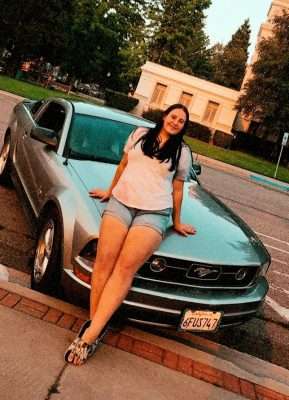 Heather Rain Ayotte was born June 4th 2004 in Quincy, California, to Troy and Jessica Ayotte. Heather was the second of five children born out of her parents’ union.

Heather attended Pioneer Elementary from kindergarten to 5th grade and Plumas Charter School from 6th until her untimely passing where she had just begun her senior year. Heather was a bright student and was weeks ahead on her assignments; her parents had been informed that she only needed Econ to have graduated with her high school diploma. Without a doubt, Heather had the determination and capability to have made this happen months in advance.

Heather participated in Girl Scouts when she was in elementary school and later Girls Rite from junior high on. Heather also played volleyball for Plumas Charter her sophomore year, she’d talked about the possibility of continuing, however, covid did not allow for that during her junior year. Heather spent numerous years playing with Quincy Little League, even making the all star softball team once. Heather was also a participant in Upward Bound and had been taking courses at FRC.

Heather loved being outside, whether she was swimming (she was known from an early age to jump into Oakland camp fully clothed, despite freezing temperatures), going on camping trips for her birthday or deer season, and she absolutely loved hunting. Heather practiced safe and ethical archery and rifle hunting and was skilled in both despite once accidentally shooting a hole in her Dad’s hood. Heather ethically harvested 2 deer in previous years and was very excited about this year’s recently opened rifle season. Heather loved music and had learned to play the violin and guitar in junior high. She very much enjoyed listening to music and was often found with ear buds in. She attened her first live show at 14, getting up to the front of the stage and was able to fist bump the lead singer during the set. The sparkle in her eyes and the huge smile on her face lit up the entire room that night and was a feeling she never forgot.

Heather was an amazing sister and daughter who often helped fill gaps with child care for her youngest siblings as well as helped with homework when needed. Heather started helping her Mom with cleaning empty rentals last summer and made a pretty penny for her hard work and attention to detail. She also worked under Julianna Munger as an assistant at her in home daycare, working with as many as 14 young children at a time. Heather recently started working at Papa Murphy’s Pizza in Quincy. Her entire family is beyond proud of the initiative Heather showed to earn her own money and of her stubbornly fierce independence which would have seen her become very successful later in life.

Heather was beautiful inside and out with an amazing smile and hilarious sence of humor. Heather could be loud and bold when needed and she always defended her family and friends. The softest and most beautiful parts of Heather shown through the most when she engaged with her younger siblings, especially her baby sister one on one, and with animals of all kinds. Heather’s dog Bubba was a very special part of her life that she gave so much of herself to.

Heather’s life was tragically cut short at 17 years old on Sept 27th 2021 when she succumbed to her injuries from a terrible car accident. Before she left this earthly realm, Heather did what she did best, protect the ones she loved. Heather was able to reach the road despite her unseen and painful injuries and flag down a passing motorist in the pouring rain, dark, and cold to get her friends help. Without the courage, heart, and strength that this beautiful young woman possessed that night, there is little doubt that the outcome would have been much worse.

Heather is proceeded in death by her Grandmother, Joyce Michael, whom her mother knows immediately swooped up into her arms and made sure she was safe. Grandfather,  Steve Ayotte. Great-grandparents, Glenn Michael, Bob Ayotte, and Bill and Pat Jester.

In lieu of flowers, Heather’s family asks that donations be made to the Mountain Valley Parents Club at Plumas Charter School.