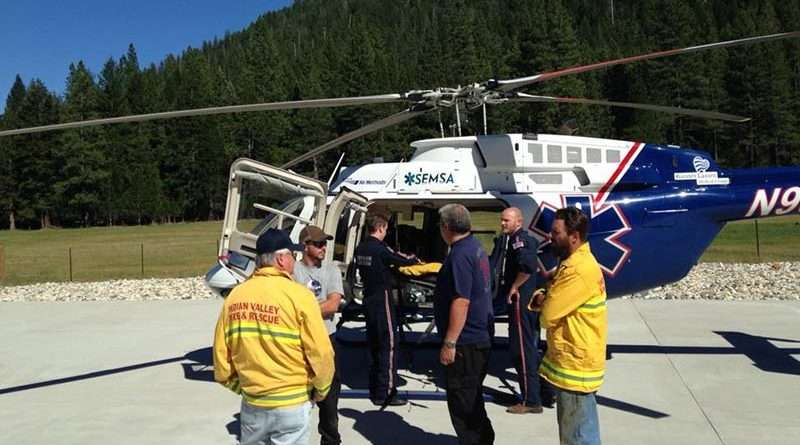 Christian Palmaz indicated over two years ago that he hoped the helipad on his Genesee Valley Ranch property could be put to good use by local authorities in case of medical emergencies. That vital use of the helipad has come to pass.

Local first responders Indian Valley Fire and Rescue, PHI (ground ambulance), and Care Flight had scheduled a training event on the property July 3, but got a call June 30 to go into action. The helipad was used to medevac an injured motorcyclist.

There was a crash near Genesee on June 30 and the helicopter ordered was able to successfully land and medevac safely. The crash  victim was later reported to be doing well.

“This is one example of how a community comes together, helping each other,” the Indian Valley Fire and Rescue said in reference to the incident. They also thanked the Genesee Valley Ranch for providing the space.

“When first responders need to save a life, property boundaries can sometimes become obstacles to the task at hand. Our goal was simply to provide access to our resources and allow training so that they may be better prepared in the event the unthinkable happens,” said Palmaz of the June 30 incident.

While an emergency helicopter can technically and legally land where it needs to, the uneven terrain, power lines, debris in tall grasses, etc., unseen from the air can all make doing so difficult. It can also eat up precious time. Having a consistent environment on which to land safely is a real benefit, according to both first responders and Palmaz.

“We are really honored that our helipad was able to play a role in providing emergency care to someone in need. The first responders who called on the accident demonstrated incredible prowess. We are extremely grateful to them for their dedication and service,” said Palmaz.

13 thoughts on “Helicopter rescues in Genesee”