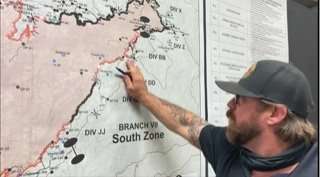 Quincy CHP reported the news on its Facebook page this morning, so Plumas News checked in with Leslie Edlund, the Plumas National Forest spokeswoman for the Dotta Fire, and she confirmed it. An incident command team is taking over the fire’s management. More details will be released by the Forest Service this morning, but for now she confirmed that Jake Cagle is among the team that has arrived.

Cagle became a bit of a local rock star last fall when he made two tours of duty on the North Complex Fire as the systems operations chief. His daily briefings drew a cult-like following even spawning a T-shirt with his likeness. While it’s good to have Jake back in Plumas County, it’s also a signal that the fires might be here for a while. New updates on the Dotta and Sugar fires are expected soon.