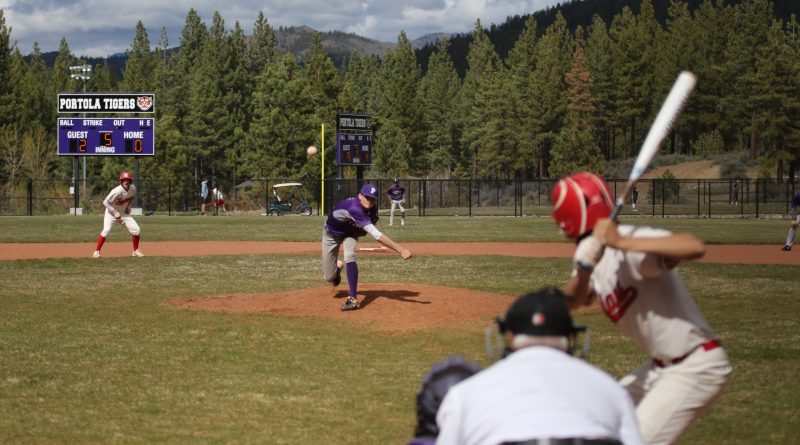 PHS pitcher Tanner Carr throws to Trojan Cannan Newman in the 5th inning when only two Quincy runs were on the scoreboard. Photo by Mari Erin Roth
News Sports
May 11, 2022 Editor

Stewart served as catcher for the entirety of the game to freshman pitcher Emery Powell. Zero bases were stolen from Powell who threw 53 pitches to 20 batters in 4 innings. One Biggs batter was struck out. “Emery Powell pitched well in a complete game win in game one,” said Portola head coach Tim Brubaker. “Our approach at the plate was really good.”

In game two, the Tigers won 7-2 in a 7-inning game. The Wolverines held the Tigers to zero in the first inning and put their own mark up first on the scoreboard in the bottom of that first inning. Neither team scored in inning two. PHS opened up the firepower in the top of the 3rd inning with 5 runs. The Wolverines came back with another run in the bottom of the 4th inning, 5-2. Keeping the pattern going, the Tigers added the last 2 runs of the game for the winning and final score.

Trips across home plate came from Carr, Berg, Moran, Cade Wilmer, Cody Wilmer, Jackson Powell, and Emery Powell. RBIs came from Moran, Stewart (2), and Sheridan. Cade Wilmer was the only Tiger to steal a base from the Wolverines.

Quincy and Portola tangle in a pair of rivalry games

The Tigers and Trojans played on each others home diamonds May 3 and 6. The Quincy boys won game one in Trojan territory, 4-1 and won the second game in Tiger territory, 13-5.

The Trojans were first to score May 3 in Quincy the first inning with a single run. They scored another in the bottom of the 2nd inning. The 5th inning brought a pair of runs to the Trojans score for a lead of 4-0. The Tigers managed a run (Emery Powell) at the top of the 6th inning of a game that ended after the scoreless top of the 7th inning.

Hendrickson handled pitching for the entire game striking out 17 Tiger batters of 27 faced. Wow. That’s gotta be some kind of record. “I’m not sure if it is a record but it is very, very impressive,” said QHS head baseball coach Jake Hatzell. “It’s very uncommon. He pitched an amazing game, one of the best I have seen in High School.” Hendrickson gave up just 4 hits.

The rematch (game two) rivalry took place a few days later on May 6 in Tiger territory on the Portola newly refurbished diamond. The Trojans won, 13-5. The game was very tight for the majority of innings. Quincy scored first in the 3rd inning but it was a standoff in innings one and two. The Tigers held QHS at bay with a score of 1-0 until the 5th inning when the Trojans were cut loose and added 4 runs to their lead, 5-0. The Trojans took their lead and ran with it in the top of the 6th inning to add 6 runs, and the Tigers added 2 runs, 11-2. Quincy matched those 2 runs in the top of the 7th inning and PHS put up 3 runs in the bottom of the inning for the final score, 13-5.

Runs for Portola were scored by Carr, Moran (2), and Emery Powell (2). RBIs came from Carr (2), and Sheridan. Carr stole a base and Cade Wilmer gave it a try. Stewart served as catcher for 3 Portola pitchers: Carr, Moran, and Emery Powell. Carr pitched 4.1 innings and struck out 4 Tigers. Powell and Moran each pitched 1.1 innings and Powell struck out 2 batters. “Quincy played just a little better than we did in the two games and congratulations to them,” said Portola head baseball coach Tim Brubaker. “I am very proud of my boys. They competed hard in both games.”

The Trojan runs came from Crespo, Jake Lees (3), Newman (3), Hendrickson (3), James, Walke, and Cameron Schmidt. Lees stole a base, Newman stole two, and Hendrickson stole one. James pitched 5 innings, striking out 9 Tiger batters, and Thackeray pitched 2 innings to strike out 6 batters.  “I have just been very proud of the boys and how much they have battled this year,” said Quincy head baseball coach Jake Hatzell. “They are coming together at the right time and I’m really looking forward to playoffs and seeing what they can do.”