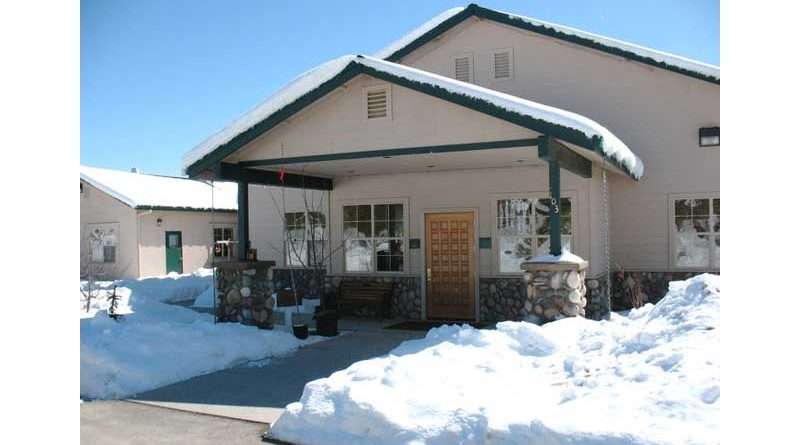 This is the first in a series of articles about High Sierra Animal Rescue, a local no-kill rescue organization committed to saving homeless animals and advancing pet welfare. View part 2 and part 3.

His name was Sidney. Steve and Nancy Harding (of the Graeagle Store) weren’t looking for a dog the day Nancy’s co-worker brought Sidney to the hospital where she worked. But her friend, a volunteer with High Sierra Animal Rescue, assured Nancy, “This is your dog!” Nancy looked into Sidney’s soft brown eyes, and knew her friend was right.

The small, yellow lab mix puppy was named Sidney after Steve’s grandfather, a man he respected and missed. The two became inseparable, and Sidney would scarcely leave Steve’s side, except to greet customers and vendors at the Graeagle Store.

Sidney was soon joined by Libby, another HSAR rescue dog, and the two became the best of friends. Says Nancy Harding: “Sidney was everything to us. We provided the best we could for him and we are forever grateful to High Sierra Animal Rescue.”

Sidney’s adoption took place in June of 1999, just a few weeks after HSAR was formed. This first adoption marked the beginning of the important work of HSAR and its co-founders, Doug and Betty Rodrigues, a journey that now spans over 18 years. They couldn’t have known it at the time, but Sidney’s adoption marked the first of the now 4,200 adoptions carried out by the rescue organization since its inception in 1999, and his long, happy life with the Hardings might not have been possible without it.

Doug and Betty Rodrigues didn’t initially set out to start an animal rescue. Long-time animal lovers, they were considering donating a specialized piece of equipment to the community such as a diagnostic test machine, to be used by local vets and the county shelter. Around this time, they met Terry Popish, a local dog trainer who had a vision of starting a rescue organization to help end the senseless killing of animals in Plumas County.

Looking at the three years prior to HSAR’s founding, 1996 through 1998, an average of 1,100 animals (cats and dogs) came into the county shelter annually. Unable to handle this large number of unwanted animals, an estimated 500 adoptable animals — 300 cats and 200 dogs — were being euthanized by the county each year.

“When the shelter was full, animals had to be euthanized to make room for the new ones coming in. It was a vicious cycle that needed to be stopped,” said Doug Rodrigues.

Realizing the immediate need in their community, the Rodrigueses met with Popish and her family multiple times over the next year, developing a plan that included a 501c3 nonprofit application, board of directors, by-laws, architectural renderings and a name for the organization.

Meanwhile, a 5-acre parcel was purchased in Delleker, the present site. The nonprofit became a reality in May of 1999 with the approval from the state of California and the federal government.

Within four months of its inception, HSAR had saved 18 dogs. While this was a success, the Rodrigueses knew that they would have to work harder if they were going to rescue the 200 dogs per year that were at that time being euthanized at the county shelter.

They quickly developed an extensive number of foster homes and contracted with a local family to provide outdoor kennel space for about eight to 10 dogs at a time. They advertised available pets in this newspaper with sponsorships from local businesses, and hosted regular adoption events in the county.

In order to broaden the reach of their work beyond Plumas County, and to re-home as many animals as possible, they began marketing adoptions in Reno, which had a much larger population. Early on, they formed a partnership with Petco, hosting adoption events at two of their Reno stores. Other rescue groups in Reno began inviting HSAR to adoption events. A large volunteer base helped with the fostering and adoption events, as well as with transportation.

As adoptions increased, so did the need for a permanent facility. The Rodrigueses visited and studied existing successful shelters, and construction started on the rescue facility in Delleker in the spring of 2001. Seventeen rescue kennels were built, each designed to house more than one dog at a time. An additional wing with 21 kennels was built to provide a boarding service to the community and to help bring in much-needed income to cover operating costs. The state-of-the-art rescue and boarding facility was completed in May of 2002.

While seeing to the practical aspects of building and starting HSAR, the Rodrigueses networked with other rescue groups in the state. They contacted a board member from (the now defunct) Almanor Humane Society and asked for advice.

They were told that their group initially had a large volunteer base, but eventually the day-to-day care of the animals fell on the shoulders of the board members. The board literally got burned out and experienced what is called “compassion fatigue,” a real condition where one is unable to continue being effective.

The Rodrigueses were advised that to be successful they must have a paid staff to provide the daily care of the animals, and to never take their volunteers for granted. Today, HSAR employs a small staff that cares for the dogs and oversees operations of the shelter every day of the year. Volunteers are utilized for socializing and training the dogs, as well as for community outreach, humane education, adoptions, and special events and fundraising.

In 2000, the Rodrigueses were invited to a series of conferences for small rescue organizations held at the San Francisco SPCA hosted by leaders in the industry. There they were introduced to the Four Pillars for Success in rescue.

These are: 1) to have an aggressive spay/neuter program to help manage the pet population, 2) to have an effective adoption program, 3) to have a humane education program to educate the community about responsible pet ownership, and 4) to work well with other counterparts in the county. Putting these into action was critical to the long-term success of HSAR.

The SFSPCA advised that managing the pet population required spending a significant amount of the budget to support spaying and neutering of animals in the community. In the first 10 years of operation, HSAR provided hundreds of spay/neuter certificates to help manage the local pet population.

Early on, The Rodrigueses recruited and trained a number of specialized volunteers, called adoption counselors, who would assist with adoptions at various locations, ultimately helping to increase adoptions. Adoption counselors are still an integral part of HSAR, and perform adoptions at the shelter, at Petco in Reno and other special events.

HSAR simultaneously began working in the county elementary schools by setting up a humane education program to teach responsible pet ownership. To this day, HSAR operates the RedRover Reading program in all county elementary schools. In addition to presenting lessons about respect and responsibility, this national program employs an anti-bullying message, and teaches children that “It’s Cool to be Kind.”

Around the same time that HSAR got its start, another rescue group formed — PAWS (Plumas Animal Welfare Society) — founded by Stephanie Leaf. Plumas County now had two rescue groups working to prevent adoptable animals from being euthanized. Working together, the groups had a shared goal of Plumas County being no-kill by 2002.

PAWS focused on cats while HSAR focused mainly on dogs, and together they began saving the 500 pets per year that were previously being euthanized. HSAR and PAWS, along with another rescue group, Friends, continue to work with the county shelter in order to rescue as many homeless pets as possible. Today, HSAR primarily takes in dogs from Plumas Animal Control and Lassen Animal Control, and provides for all of their care until they are adopted.

Looking back to these early years, Betty Rodrigues recalls the toughest part of working in animal rescue. When she and Doug would visit the local shelters to take in dogs for HSAR, they would occasionally have to pass on some. Since they didn’t have a facility at the time, space was very limited.

In the middle of the night they’d both be wide awake thinking about the dogs they left behind.

“The next morning we would head for the shelter and take the dogs we didn’t take the day before. That process was and has been the toughest thing we have ever had to do.”

Today, trained personnel perform that most difficult job, and due to its large facility, HSAR typically has space for all of the adoptable dogs at regional county shelters. An aggressive spay and neuter program has also helped to manage the Plumas County pet population.

From these early beginnings, HSAR has been able to save over 4,200 animals in just 18 years.

“This has only been possible because of the dedication of so many volunteers, donors, employees, and board members, and because of our relationships with and help from other rescue organizations,” says Doug Rodrigues of this success.

Today, HSAR continues its important work in the region, continually examining its mission and adjusting to the needs of local homeless pets and the community. The two biggest requirements that HSAR currently has are for more volunteers and steady income through donations.

In order to continue the mission of saving local homeless animals, it launched a monthly giving program earlier this year, called “Guardians of HSAR,” where donors make recurring, monthly donations in their chosen amount to the organization. Guardians help HSAR balance its budget, and prepare for unexpected expenses like veterinary procedures for special needs dogs.

Looking to the future, new HSAR Executive Director Heidi Rose says that “through careful management, continuing education for staff and leadership, as well as financial and practical support from the community, High Sierra Animal Rescue will remain at the forefront of animal rescue and welfare with the commitment to save and improve lives.”

To enrich the lives of homeless animals in the community, volunteer opportunities and adoptable animals are available at HSAR, PAWS, Plumas County Animal Shelter, and Friends.

The public is invited to visit HSAR Monday through Saturday. For inquiries, to adopt a dog or to support its work either by volunteering or becoming a Guardian of HSAR and donating, contact HSAR at 832-4727 or [email protected]

The next article in this series will focus on the adoption process at HSAR, and highlight senior dogs and dogs with special needs.