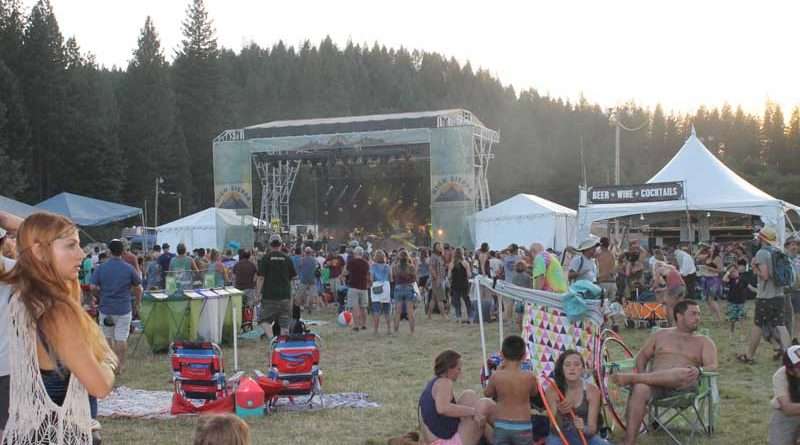 As the sun starts going down, one band changes for another on the big stage in the grandstand area.
News
July 15, 2017July 14, 2017 Mari Erin Roth, Staff Writer

Fans of the big annual music festival began their pilgrimage to Quincy on Wednesday, June 28, in preparation for the festival opening June 29. Cars and RVs lined the streets to get a jump on receiving their admission passes to choose ideal camping spots inside the fairgrounds property.

Crowds flocking inside for bands performing on the Grandstand Stage filled the enclosure all the way to the back. The Saturday headliner, Trey Anastasio Band, packed in the fans with two back-to-back sets at 8 and 10 p.m. Ween was the big act Friday night and Gov’t Mule closed out Sunday as the final band on the Grandstand Stage at 9:30 p.m.

Midnight troubadour sessions were popular, filling the Mineral Building to capacity with “festies.” Those late shows were included at no additional charge and provided a casual setting where members of different bands took turns in rotation playing a song of their choice. Calling on other members of the troubadour session to take a lead or contribute vocals was a special treat for the audience.

“We heard it was a real family-friendly environment,” said Racheal Smith from San Diego. She and her husband Lee brought their four young children north for the festival. “We’ll be back for sure,” said Racheal, as her three eldest hung suspended in a hammock.

The colorful parades commenced multiple times during the day. With flags and stilted walkers, masks and costumes, the collected ensemble improved their performance with each run. First time participants got the hang of “parading” by the time the final parade ended Sunday.

Publicity manager for High Sierra, Marshall Lamm, provided some  early numbers: 8,500 people (including staff, volunteers, and vendors) attended the 2017 festival. Three hundred Plumas County residents took advantage of the special  “locals” discount for tickets. Three trailers of ice were used and over 40,000 pounds of recyclable material were diverted from landfill. In addition, “35 kegs of kombucha were consumed,” said Lamm.