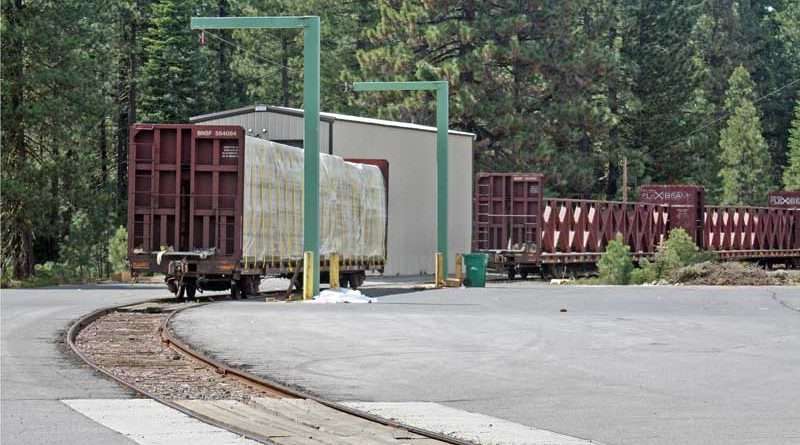 Clear Creek Junction, once the end point of a 13-mile section of track from the town of Chester — one of the shortest railroad train track lines ever used in the country — has served as a depot to several companies over many decades, including the Southern Pacific passenger and freight train service into Westwood from Fallon until 1914, Red River Lumber Co. in the ‘20s and ‘30s, the Fruit Growers Supply Company starting in 1944, the Collins Pine Co. beginning in 1943 and the Burlington Northern Santa Fe Railroad. Photo by Stacy Fisher
News
February 19, 2018February 15, 2018 Stacy Fisher, Staff Writer

Built in the early 20th century to support the development and infrastructure needs of a growing region, Clear Creek Junction is located just inside the northeastern quadrant of Plumas County. Southern Pacific passenger and freight train service into Westwood from Fallon didn’t begin until 1914, using the junction as a connector point.

The railway and depot is currently under Burlington Northern Santa Fe ownership.

An electric train featuring electrified overhead lines was operated by the Red River Lumber Co. in the ‘20s and ‘30s. The company used the rail line to transport logs from its logging operations located along the track near St. Bernard Lodge and Child’s Meadow, approximately 20 miles west of Chester.

Once fully loaded, the train made a 13-mile run from Chester, farther than that from log landings, to its final destination at the junction where the loaded train cars were hooked up to a separate locomotive to haul its cargo to the company’s sawmill located in the town of Westwood, converting the raw wood into cut lumber.

Eventually, the train was switched from electric power to steam and later to diesel.

The Red River Lumber Co. sold its business, plus the town of Westwood and 90,000 acres of forested lands, in December 1944 to the Fruit Growers Supply Company, which took over the mill in Westwood to manufacture wooden crates to hold citrus for distribution throughout the state of California and beyond.

The company stayed in business in the area for just 12 years before shutting down the mill and discontinuing use of the rail line in 1956, after corrugated cardboard containers supplanted wooden crates.

Previous to this time period, the Collins Pine Co. had acquired timberlands in both Tehama and Plumas counties, and managed the forest on a sustained yield basis from the outset.

Collins Pine constructed its own sawmill in Chester in 1943 to begin work on timber production using the main line to Clear Creek Junction, where train cars shipped the finished lumber products to various regions of the country, stated Terry Collins, co-owner of the Collins Pine Company.

The 94,000-acre Collins Almanor Forest, located in the Sierra Nevada of northern California, consists of species that include ponderosa pine, white fir, sugar pine, and Douglas fir — all in high demand.

The sawmill was remodeled and updated to a modern facility in 2003 with electric power cogeneration, and to this day provides jobs for nearly 200 people in Chester, many of whom come from second or third generation forest families who have worked for Collins Pine, many in career positions, providing an important contribution to the local economy.

After the 13-mile section of track — one of the shortest railroad train track lines ever used in the country — was disabled in 2005, trucks were employed instead by Collins Pine to transport around 25 percent of the company’s 120 million board-feet of wood yield and specialty lumber products to Clear Creek Junction annually.

Currently, Clear Creek Reload LLC, established in 2008, is contracted by Collins Pine to haul finished wood products by truck from the sawmill in Chester. The company provides a crew and forklifts to transfer the lumber onto the empty boxcars to be transported to distant locations.

Information for this article was compiled partly from the book, “Red River; Paul Bunyan’s Own Lumber Company and Its Railroads,” by Robert M. Hanft, Internet sources and Terry Collins of the Collins Pine Co.