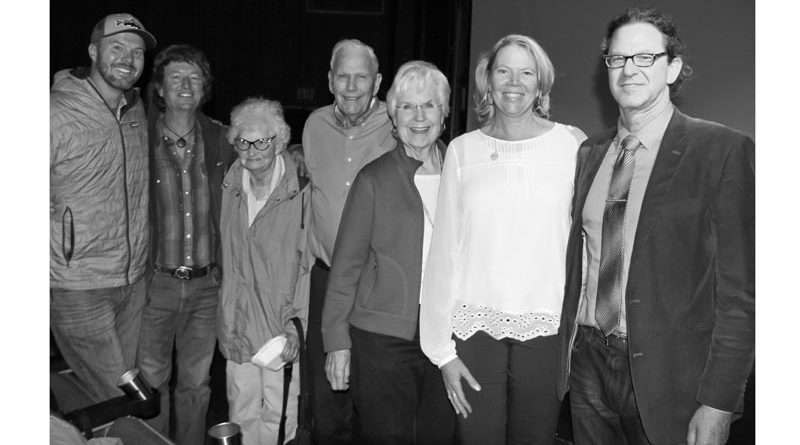 Environmental preservation is serious business, but that didn’t stop 80-something honoree Dick Laursen from rocking the house with stories and laughter when local members of Friends of Plumas Wilderness (FPW) brought him on stage recently.

Speaking to a capacity audience of more than 240 people at the premiere of FPW’s brand new documentary film “Visions of the Lost Sierra,” held in Quincy at the Town Hall Theatre during the countywide River/Wild Film Festival, Laursen received lifetime-achievement recognition, the “Wilbur Vaughan Wilderness Visionary Award.”

Laursen spent many years of his boyhood growing up on Milsap Bar and Crooked Bar.

In 2004, he published his memoir, “Life on the Middle Fork Feather River, 1937-1941 Plus.” The book details his life and times from ages 8 to 12 staying with his mother and stepfather on the river during the Great Depression.

The experience left a lasting impression upon Laursen.

Since the 1960s, he has been an active proponent for saving and protecting the Middle Fork Feather River.

Twice he hiked and swam an entire 65-mile section of the river from Sloat to the Oroville Dam construction site — once with a hearty, good friend and the second time with his three teen sons.

He documented the trips in photos and notes that later helped him become a persuasive advocate for designating the Middle Fork under the national 1968 Wild and Scenic Rivers Act. The effort succeeded, thanks to the help of many committed volunteers and a large section of the river became one of the first eight waterways in America to be so designated as wild and scenic, a protected status it still enjoys today.

“Visions of the Lost Sierra”

Filmed by award-winning cinematographer Matt Ritenour of Chico, it was produced with a $20,000 Patagonia Media Grant from the outdoor gear and clothing company.

The show celebrated the 50-year anniversary of the national Wild and Scenic Rivers Act as well as the Middle Fork Feather River and its unique history.

Ritenour introduced the film that he co-directed with FPW President Darrel Jury of Meadow Valley. There are plans to enter the film in other festivals in 2019.

Interviewed before the Quincy event, Jury talked about water’s priceless and essential significance for life and wild places, saying the stories told in the film project are proof that committed citizens of the Lost Sierra can, indeed, inspire us to protect the pristine wilderness we call home.

“The Feather River supplies drinking water to 26 million people, 60 percent of Californians,” he explained. “In addition to protecting natural, cultural and recreational values, Wild and Scenic Rivers provide clean drinking water to people who may never visit them. This film is dedicated to the people who kept the river free-flowing.”

Friends of Plumas Wilderness is a nonprofit. The organization sponsored the film festival and award program as part of its work to study, explore and maintain the integrity of natural ecosystems in the Northern Sierra and Southern Cascades.

The three additions to the festival included phenomenal films that roused cheers from the packed auditorium: “Run Wild, Run Free: 50 Years of Wild and Scenic Rivers” by Shane Anderson; “The Wild President” by Will Stauffer-Norris; and “A Misty Existence” by Colby Elliot.