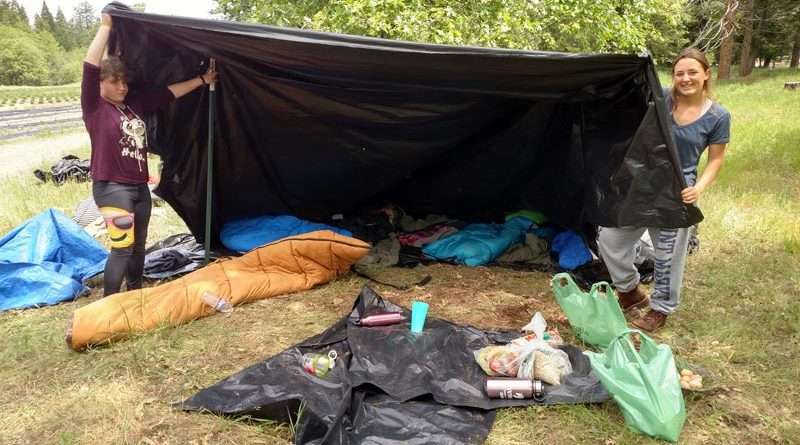 At the end of May, students in Plumas Charter School’s Indian Valley Academy had the opportunity to experience what life is like in developing countries by participating in the unique Global Village program at a local camp outside Taylorsville.

Having been told only that they would be participating in a multi-day “project-based learning” camping activity, 30 students in grades seven through 11 gathered May 29. They had been instructed to pack lightly: the approved packing list included only a sleeping bag, a toothbrush, layers of clothes, closed-toe shoes, a flashlight, a water bottle and a cup.

Students were then divided by lottery into six groups, or countries: Cambodia, Ukraine, Syria, Haiti, Pakistan and South Korea. Along with their teachers and five 11th-graders as chaperones, they headed to the camp area.

There, each country was allotted a geographic area. Travel between countries was limited to designated roads only, and border crossings were monitored by teachers. To simulate actual border dynamics, borders could be open, closed or regulated, requiring documentation or tariffs to cross.

A simulated subsistence economy was created by granting each country a resource base: food, fuel, building supplies, cookware, water or labor. Using some basic rules, students were then free to bargain and negotiate with each other to make sure the needs of their countries’ citizens were met.

Two small meals were provided initially, but after that students had to trade for food, which consisted of vegetables, potatoes, rice, eggs, oats and fruit. They also had to procure cookware and materials to build shelters. Each group was provided one match; fires for cooking and warmth had to be started and maintained.

Teachers and chaperones mingled with the students, but their role was limited to “managing and observing,” said Ryan Shramel, IVA teacher and site director.

Major global crises and dilemmas played out in microcosm during Global Village: leaders came into power through decisiveness or luck, humanitarian efforts were foiled by national pride, alliances were made and broken, unguarded resources were lost in raids, unfair trade deals were debated, countries accepted refugees, unproductive members of society were exiled, and thieves were “imprisoned.”

IVA had offered the Global Village program four years ago, said Schramel, but the format was focused more on the experience of daily life in a developing country. “Yes, that builds empathy,” he said, “but I thought ‘there’s so much more you can do with this.’”

For this year’s program, Schramel added the resource allocation and trading elements, making the program into a hands-on social studies experience. On-the-ground mini-lectures drove home lessons on diplomacy, the instruments of power, economics, government regulation, and industrialization. Because members of each group also had an assigned “job” related to their resource, students also learned about topics such as local agriculture and the timber industry.

At the same time, it was important to teachers and staff that the program retain its goal of helping young people develop compassion and understanding: “We hope to achieve outcomes such as gratitude and awareness for the world around us,” program materials stated.

Teachers saw this happen as students spent time away from their accustomed “first-world” lifestyle. Teacher Shalyn Goss said she noticed some students struggling to go without sugary snacks and electronic entertainment.

Debriefing and written reflections after the program was over gave the students a chance to process and integrate what they had learned.

“This has really taught me a lot,” said eighth-grader Jacob Cook. “Having a real bed is amazing; it’s very important that my stomach never goes empty.” However, despite being hungry and tired on Day 2, he said he didn’t want to go home yet.