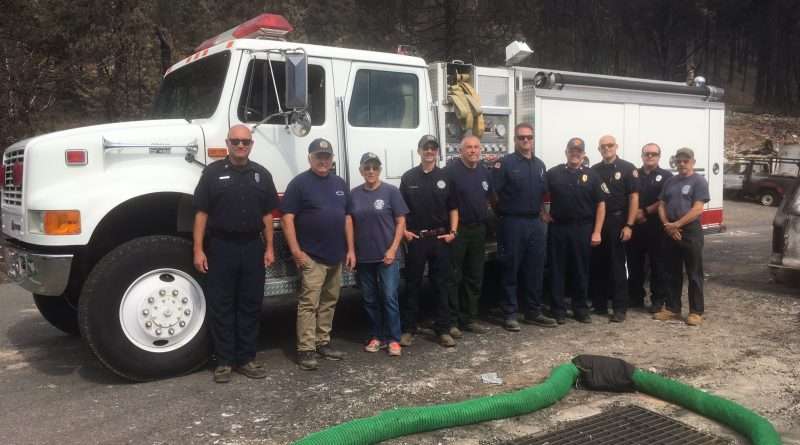 The Indian Valley Fire Department survived the Dixie Fire, and was bolstered by other departments throughout the state that donated new equipment, but now insurance premiums threaten to kill the department. File photo by Meg Upton
News
September 9, 2021September 15, 2021 Editor

The whole thing was the idea of  Truckee Meadows FP District Captain Shawn Heywood, who is also the Loyalton Volunteer Fire Department Fire Chief. His Loyalton crew had many ties to Plumas County and all wanted to do something as well. Heywood brought his idea to his fire chief at TMFPD, Charlie Moore, who embraced the idea. Heywood’s ties to both departments forged the efforts to give to Greenville.

“Loyalton felt we should do something, We had excess equipment and we needed to clean out the surplus,” said Heywood.  Heywood said that many in the Loyalton and Truckee Meadows departments have strong ties to Plumas County.

Along with the engine, Indian Valley Fire Department received a full truck and trailer load of equipment. The new engine and future new fire station have a full stock of equipment now.

“They could not have been any nicer. Good people,” said Orange. He related that many of the firefighters present at that meeting had ties to Plumas County.

“They related how many of them and their constituents visit Plumas County—so much so [that] they consider us as part of their community regardless of the state line and want to help us,” said Orange.

The Truckee Meadows District board asked their fire department to help replace equipment lost to the Dixie Fire. The two fire departments took Wednesday to fill up a trailer with equipment to send along with the engine.

The Indian Valley Fire Department not only receives an engine but the TMFPD-outfitted the vehicle.

“They did a great job in outfitting the engine. It has seven composite SCBAs, generators, jaws of life, a full complement of hose, nozzles and more,” said Orange.

“There is not a dent or scratch on it and I am sure they waxed and polished it the day before,” said Orange.

Members of all three departments and IVCSD board members were present in Greenville at the site of the old fire station and Greenville Town Hall on Thursday morning. Orange pointed out various parts of the building structure and the engine that burned inside to the members of Truckee Meadows and Loyalton. He inspected the new engine with a few members of the Indian Valley Fire Department.

“It’s pretty humbling in how they care and are helping us,” said Orange,  the new acting fire chief.

Indian Valley Fire Department will be storing the new equipment and engine in Taylorsville while the new fire station is being built in Greenville at its new location on Hwy 89 across the street from Standart Mine Road.