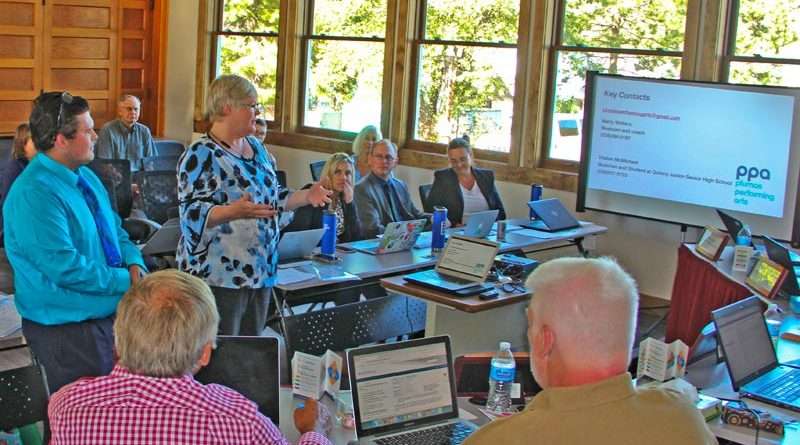 Plumas Performing Arts updates school board on support for artists

Founding member-musicians Marty Walters and Tristan McMichael with the new Plumas Performing Arts (PPA) nonprofit briefed the Plumas Unified School District’s  Governing Board of Trustees in August about progress to form the organization that will be dedicated specifically to the support of performing arts, including music education.

“PPA will (soon) have its first board meeting,” Walters told the school board, referencing the group’s successful recruitment of interested volunteers and arts boosters. “We want to keep you updated because it’s our goal to support and wrap around the regular curriculum happening at schools.”

Do you have questions about how music can help your student’s grades? Want to know where you can find a music teacher for private lessons? How can you get help with costumes or borrow an instrument to play in the local orchestra? Is there help applying for summer performance camps?

For these and other questions of interest to families and students, PPA has answers and assistance. In fact, they encourage you to email them at [email protected]

“We’re like a booster club for performing arts education and we work for teachers and students of all ages,” the team’s PowerPoint presentation stated at the meeting.

PPA wants to fill the funding and resource gaps in Plumas County’s existing music, drama and dance programs. The group is forming as a new California nonprofit corporation and will partner with existing organizations, groups and individuals. They are also focused on seeking new sources of funding and leveraging proven sources of support.

McMichael teamed up with Walters to form PPA after working independently for about a year to raise funds for instrument repairs and acquire used instruments for students who want to learn to play and/or be part of their school band. A dedicated music lover and musician, he’s also helped PUSD purchase sheet music, to name some of his accomplishments.

“We are doing a countywide instrument drive,” he told the trustees. “We’ve reached out to all of the public and Christian schools to ask them what they need.”

McMichael is a student at Quincy Junior-Senior High School and he said community members continue to contact him about donated instruments. The team’s presentation included a list of eight instruments received during the summer donation drive — from conga drums and saxophones to string instruments, a keyboard and more. Each instrument has already been provided to a local music educator.

“We want to show how important it is to advance music and the performing arts,” Walters said. “Learning music, dance and drama works to support the whole child and creates lifelong performing artists.”

The organization wants to advocate for performing arts roles in evidence-based learning strategies, communications skills development, early and elementary education, diversity and inclusiveness that creates a safe community for all, talent development, advance education and training, economic development and community unity and resilience.

McMichael told the board he hopes to establish an amphitheater in Quincy’s Dame Shirley Plaza to host community concerts. Three diseased trees in the park are proposed to come out and McMichael is working with Sierra Pacific Industries on the project proposal, which he estimates could cost $20,000 to $50,000. He’s already met with county staff and is working on his next outreach phase.

PUSD Trustee Joleen Cline commented that Portola is also building an amphitheater and she would encourage the community to share its plans and methods with McMichael.

She talked about the need to invest in transportation, learn from experts, bring more people into the process and communicate across multiple platforms. Building directories of programs, teachers and resources is a priority for PPA and so is developing performance venues in more places.

PPA’s strategy for success is multifaceted. They want to provide more than money, they also want to advocate and build the organizational capacities of the groups they support.

In addition, they’re working with existing booster organizations and similar groups. The PPA board is built from community members and arts professionals, family members, high school students and others.

“We’re emphasizing PPA being a self-perpetuating and countywide organization,” Walters said. “One that will serve our communities for generations to come. We see it as an all-ages effort designed for longevity.”