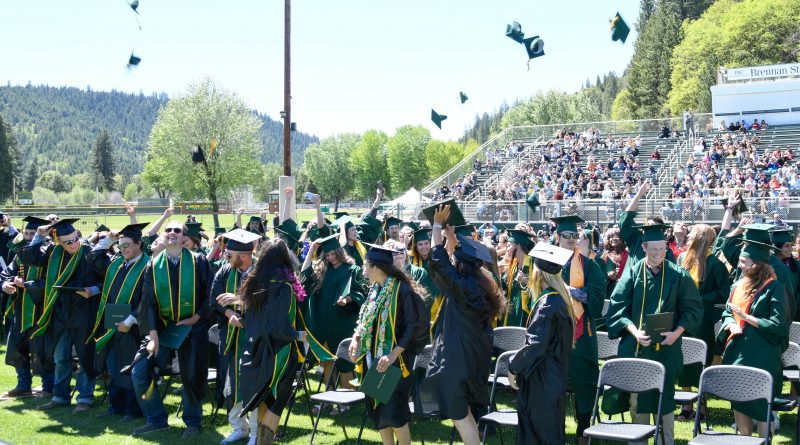 Feather River College graduated its class of 2022 on Friday, May 20, at Brennan Stadium under a bright blue sky and a challenging windstorm.

President of the Board of Trustees, Guy McNett, welcomed those assembled with an acknowledgement of the uniqueness of this particular class “not just surviving but thriving” through the gauntlet of their contemporary world—referring to learning while under continuously changing COVID restrictions and protocol and then last summer’s Dixie Fire.

Katherine Gee, an FRC student, delivered probably the best rendition of the national anthem Plumas County has ever heard.

FRC Superintendent/President Dr. Kevin Trutna welcomed the graduates and attendees, and in his remarks gave those assembled interesting demographic information and achievements of the class of 2022, including an undefeated football season, and nearly all of the 13 sports played at the college achieving some sort of statewide recognition. He also mentioned the achievements of Phi Beta Kappa’s honor society and the rising numbers of students eligible for that honor. He also acknowledged the 57 degrees being awarded on Friday going to those enrolled in FRC’s incarcerated students program with many also belonging to Phi Beta Kappa.

Feather River College awarded 10 Bachelor’s degrees in its Equine and Ranch Management program and 197 Associates degrees (though not all students awarded degrees were in attendance at the ceremony), along with 133 certificates. The student body was made up of 159 California residents, one international student—who also was the student speaker at the event Alex Saunders—with the rest of the student body coming from seven other states, mostly Nevada and Oregon.

The youngest graduate was 18 years old; the oldest was 71.

Retiring from the board, Bill Elliot gave the commencement speech largely focusing on the board itself and issues it’s faced during his 40 years of involvement with the college, pointing out that housing has always been an issue.

The student pick for the faculty address, Keshawn Johnson, delivered a dynamic and heartfelt speech built around rapper and singer songwriter J. Cole’s words “love yours” which challenged the graduates to find it in them to love themselves and the journey to become who they are and will be with lines like “you aren’t falling behind, you are right where you are supposed to be” and “face fears, celebrate success but embrace failure.” He urged graduates poetically to stop devaluing their lives to be like others and to just be themselves. The applause at the end of his inspirational speech gave the audience a big hint as to why students chose Johnson to do the address.

Next Outdoor Recreational Leadership graduate Alex Saunders, the international student from Australia, gave his remarks and shared bits of insight as to his journey to Feather River College from Australia as a mid-twenties student. He graduated with highest honors. He also focused his remarks on being grateful and saying ‘yes’ to opportunity.

Then came the recognition of honors and those graduating with a 3.2 to 3.95 average (what appeared to be the bulk of the students). As each student took the stage to have their degrees and certificates conferred on them, Dr. Chris Connell read out their final remarks, which mostly acknowledged thanking their families and teachers for the support given them in their community college journey.

While only the full-time faculty were acknowledged in the commencement program, many part-time faculty—the bulk of faculty at any American higher learning institution—were also in attendance to cheer their graduating students on to the next phase in their academic journey.

It takes a village to get two-year college students on to the next phase in their journey—whether to work (as many in the equine and ranch program indicated) or on to a Bachelor’s degree program. Between those in the stadium stand cheering them on, and those acknowledged from the stage and in the program, FRC Class of 2022 seemed well-poised for the challenge of whatever comes next.