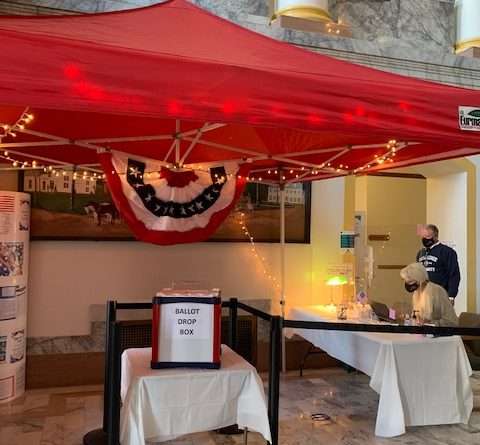 Plumas County historically is also among the first to report voting results and in past elections usually posts by 8:30 p.m. (The polls close at 8 p.m.) Locally, Plumas County voters are electing two supervisors — Districts 1 and 2; one school board member for Plumas Unified School District; and a hospital board member for Eastern Plumas Health Care.

Yesterday, a steady stream of voters visited the Plumas County Courthouse either dropping their ballots off out front in the ballot box or by entering the courthouse if they needed further assistance. Today there is an area sectioned off in the lobby of the courthouse where voters can check in to received that addditional help.

Lee Anne Schramel will assist voters that have lost or not received their ballot to get a replacement, while former Sheriff Greg Hagwood will be assisting voters with direction into the election office, as well as disinfecting the booth and pen after the voter leaves and ensuring the correct exit is used.

It’s hoped that all will proceed smoothly today and there will be four security officers stationed in the courthouse throughout the day and through the vote tabulation this evening. Yesterday, County Clerk Kathy Williams reported that her office had received threatening phone calls — many leaving messages.

“We’ve received calls from disgruntled voters regarding having no polling places throughout the county and we should know better and it’s against the law not to have them,” she said. “Also messages have been left calling us names and insinuating we don’t know what we’re doing and something will be done about it. No one has left identifying information to return their calls. One man from called and said we’re all corrupt and he demanded a polling place.”

Plumas County moved to all mail balloting in 2016 based on state guidelines. By that time 70 percent of registered voters were voting by mail and of the remaining 30 percent, only 10 percent went to a polling location.