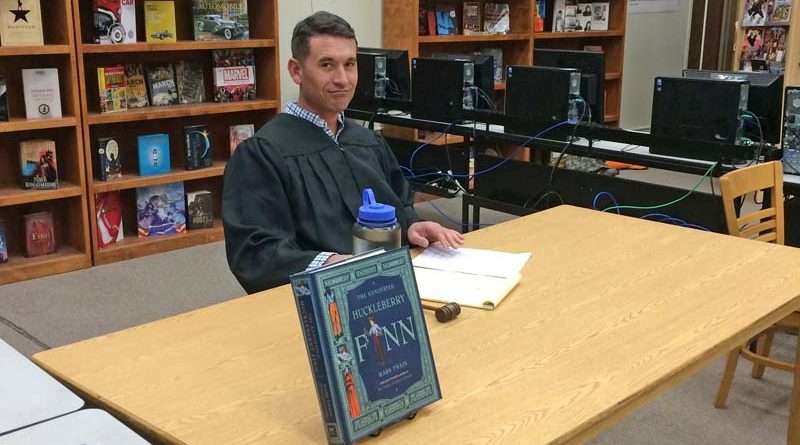 The honorable “judge,” IVA director Ryan Schramel, hears both sides of the historical debate about whether or not the American classic novel “Huckleberry Finn” should still be read by students today. Photos by Maggie Wells
News
January 30, 2017January 27, 2017 Maggie Wells, Staff Writer

What’s a school to do when the outside world comes crashing in? Hold a day of symposiums to promote thoughtful discussion. Indian Valley Academy held “Fake Day” on Friday, Jan. 20. In the early morning, students attended a lecture on research and how to spot fake news or propaganda. Next the eighth grade, which just finished the “Omnivore’s Dilemma,” by Michael Pollan, discussed fake and synthetic foods.

The day culminated with a mock trial. The defendant on trial? The American classic “Huckleberry Finn” by Mark Twain, which has been banned in school districts around the country since its first publication. “Witnesses” testifying included “Tom Sawyer,” a “child psychologist” and a “representative from the NAACP.”

Some students remarked the day’s discussions helped further understanding of the concepts in the books and in current events.