James Vincent Bender (Jimmy) of Graeagle, California was born in Reno on January 25, 1946 and passed on April 17, 2022 in Phoenix, Arizona. He was surrounded by his loving family and passed peacefully after a recent diagnosis of Wegener’s Disease, a rare auto-immune, lung disease. 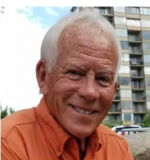 Jimmy was born and raised in Reno, NV. He was in the first graduating class of Wooster High School, 1964. In 1972 he met and dated his favorite grocery checker, Carol. She had two adorable young children that he instantly loved and after a few months they got married and became a family. He was a wonderful husband and father. He coached softball; was involved with cub scouts; served as president of the Purple Pride Boosters Club; chaperoned school activities; worked at many fundraisers and attended countless sporting events, all with great love and pride.

Jimmy worked and retired from Sierra Pacific Power Company as a lineman and an operations supervisor. He moved his family from Sparks to Portola in 1980 and they all settled into small town life quickly and easily. When Jimmy and Carol became empty nested, they briefly moved to Minden for his career advancement opportunity, but with full intentions of returning to Plumas. In 1999 they moved back to Graeagle and rarely missed a day of being grateful to live in the mountains again.

Jimmy thoroughly enjoyed 45 years recreating with family and friends on their family owned parcel of land in the Plumas National Forest, outside of Johnsville. This forest property, “Miltsville” has been cherished by five generations with campfires, playing horseshoes, hiking, fishing, and simply spending quality time together. After retirement, Jimmy and Carol spent the winters in Yuma, Arizona. While in Yuma, they enjoyed trips to Mexico, explored the desert, and shared dinners and drinks with lifelong friends.

During their nearly 50 years of marriage, Jimmy and Carol shared a life well lived. This man has been dearly loved and will never be forgotten. He is survived by his wife, Carol; his children Chad Bender (Susie); Brandee Ambrosia (Jeff); four granddaughters, Payton, Sydnee, Lexi and Kennedy; a first great-granddaughter, Lilith; brother-in-law Bart Hendricks (Daylene) and several nieces and nephews.