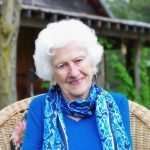 Jeanne Robinson Lomas died in Portola, California on August 18, 2021. At her request, no services were held.

Jeanne was born in Sheridan, Wyoming in 1919 to Frank S. Robinson and Mabel Atchison Robinson. After completing high school, she moved to Denver to attend nursing school and qualify as a Registered Nurse.

While working as a nurse in a Los Angeles hospital in 1942, she met and married a handsome young doctor, Woodrow E. Lomas. Jeanne returned to Sheridan for the birth of their first child while Woody was overseas serving in the Army during World War II. After Woody completed his Army service, they returned to Los Angeles and Woody continued to practice there until they moved to Minneapolis, where Woody completed his residency in anesthesia. Their second child was born in Minneapolis.

In 1950, the family moved again, to the San Francisco Bay Area where Woody worked as an anesthesiologist, first in San Francisco, then for many years at Children’s Hospital in Oakland. Three more children were born in the Bay Area. The family lived first in South San Francisco, then in Berkeley, Oakland, and Alamo. Jeanne and Woody moved to the Plumas County community of Graeagle when Woody retired in 1980. Their three younger sons eventually settled in Plumas County as well.

Woody died in 1999 after 57 years of loving marriage. Jeanne continued to live in their Graeagle home until 2011, when she moved to the lovely little cabin in Meadow Valley that was her home until the end. She lived independently until the last year and a half of her life when, her health in decline, her children began a rotating regime of full-time, in-home care. When the Dixie Fire forced the evacuation of Meadow Valley, she moved into care at the skilled nursing facility at Eastern Plumas Health Care, where she passed away under the wonderful, compassionate care of the nursing staff.

Jeanne was extraordinary in many ways; she was beautiful inside and out. She embraced her role as wife and mother with tireless strength, grace and good humor. She handled the family finances with aplomb. She was smart and outgoing and funny, with a good word for everyone she encountered. Wherever she went, she made friends. She was no pushover: she could spot a phony a mile away. She loved travel adventures, fine dining, a good novel, classic movies, dogs, a glass of wine with friends and family, crocheting, board games, puzzles, and polar bears. And shopping. Also shopping. Once her kids were grown and she was free of the drudgery of feeding seven mouths every day, she became a fine cook. Over the years, she worked in many volunteer activities.

Jeanne joins many friends and family members who predeceased her, including her parents and her brothers.

The family wishes to thank and acknowledge some of the many people who watched over and helped care for Jeanne in her later years, notably her landlords and neighbors Keri Cameron and Dana Eliason, close friend and neighbor Terry Countryman, the doctors and staff of the Plumas District Hospital and clinics, and the gracious volunteers of the Meadow Valley Fire Department. Memorial donations to Children’s Hospital Oakland, High Sierra Animal Rescue, or the Meadow Valley Fire Department would be welcomed.

Jeanne was interred next to her husband Woody at the Mohawk Cemetery near Graeagle on August 26, 2021, her 102nd birthday.