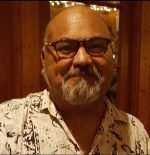 Portola resident,  Jimmey Escalante Encinas, passed from this life unexpectedly Monday morning, October 19, 2020 at Renown Hospital at the age of 62. Jimmey moved to the community of Portola twenty years ago.

He was born in El Centro, California on July 07, 1958, to Juanita Camacho and John Encinas.  He was raised in Port Hueneme, California by Tony and Sara Escalante.

Jimmy was one of the happiest people you would ever meet, especially when he was surfing, where it was common for him to be whistling, singing, laughing, bird calling and turkey calling. He was one of the best surfers that we knew. From his grab rail, roundhouse cutbacks to his super stylish tube riding, at his size, he could out surf better than almost anyone back then. And he never got cold. He would wear a vest in the middle of winter at the Strand. Through his talent, outgoing spirit, size, and strength, he was given quite a bit of respect everywhere he surfed and made quite a few friends along the way, as well.

Jimmey was an amazing husband, father, pops, and uncle to his family and those he took in under his wing. Family was everything. He was involved in every aspect of his children’s lives.