Jimmie Wayne Smith, 86, passed from this life in November 2021 at his beloved Sierra Valley ranch. 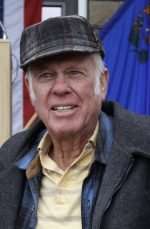 Jim was born in Post, Texas. The Dust Bowl and the Great Depression were just ending when his family moved to California. In pursuit of work, they moved frequently. They lived in Pacific Grove when Jim was a teenager and he had many entertaining stories of working as a golf caddy at the Pebble Beach golf courses.

His family then moved to Roseville, where Jim loaded ice into railroad cars and also worked as a grocery store clerk. He graduated from Roseville High School and then attended UC Davis, where he majored in Agriculture and was a member of the Calpha Fraternity.

Jim frequented the Davis Giant Orange stand, where he met Maylou Alger. In 1956, wedding bells were ringing for them at the First United Methodist Church in Reno, Nevada.

They began married life in Roseville, where Jim worked at Safeway. The couple became a family when their daughter, Coral, was born. Shortly thereafter, Safeway transferred Jim to Mt. Shasta. The small family grew with the addition of another daughter, Kelley.

Their next move was back to Davis, where Jim delivered bread for the Rainbo Baking Company. Rainbo transferred the family to Truckee in the fall of 1960. Months later, in the middle of a blizzard, their son, Ken, arrived and made the family complete.

Jim’s delivery route included Donner Lake, Donner Summit, Truckee, Squaw Valley and the north and west shores of Lake Tahoe. Through snow, sleet, rain, hail, and sun he brought not only bread, but stories, jokes and friendship around his route.

The family decided to make Truckee their forever home, so in 1963 they built a house there. Jim’s intelligence, curiosity, and strong work ethic led him to pursue varied business ventures. He owned and operated Jim’s Atlantic Richfield service station in Tahoe City; sold snowmobiles; and worked as a “chain monkey” on Donner Summit. After working many different jobs, he decided to start a new business, Jim Smith Excavating.

He enjoyed playing town league basketball with his Truckee friends. Throughout his life, when he wasn’t playing basketball he could frequently be found watching NBA, college, or local school games.

In the summer of 1972, Jim and Maylou sold their Truckee forever home and bought a ranch in Sierra Valley. Jim commuted from Beckwourth to Truckee for 14 years to continue running his thriving excavating and snow removal business. After retiring from that business, he opened Advance Auto Service in Portola with his son. Jim’s next business venture was Sierra Aggregates, now known as Blasted Rock Quarry. All this while pursuing his primary interest: ranching.

Like many modern cowboys, he could frequently be seen riding the range on his trusty workhorse ATV, with his tools and his dog riding along. They would fix or move fences, herd cattle, check water lines, or take care of one of the 67 items on the never-ending “to-do” list. The family sometimes wondered if Jim was riding around the ranch just for the joy and serenity of it.

He relished spending time with family, so there were many adventurous and memorable automobile trips to Alaska, Texas, New Mexico, and around California to visit relatives and see the sights. Jim was one of the Silent Generation, sandwiched between the Greatest Generation and the Baby Boomers. Having survived the Dust Bowl, Great Depression, and World War II, this generation was resilient, determined, and had great strength of character. They were hard-working, thrifty, and tended to not buy something new if the old one still worked. Jim had all these characteristics, and then some. He was creative and resourceful, using old, nearly worn-out items to create something entirely “new” and useful. Jim was a thinker, fixer, creator, builder, welder, and a master at operating backhoes, loaders, and other heavy equipment.

He was a caring and kind-hearted man of quiet strength who led by example. His family learned from him that integrity and a sense of humor are two of the greatest assets a person can have. He was a playful man who loved to tease, tell jokes, and make people (especially kids) laugh. Jim’s wit, laughter, and words of wisdom were genuine and unforgettable.

He enjoyed the outdoors and the simple things in life: swapping life stories with friends and family; watching tame and wild animals on the ranch; reading non-fiction books and magazines. Jim’s love of Mexican food never wavered, and he had a knack for finding the best restaurants in which to enjoy it. He liked listening to Big Band, Jazz, and old Country & Western music. Every now and then, he would bring out his harmonica and entertain the family with his repertoire of songs.

Jim was honored to serve on the Plumas County Board of Supervisors as a representative of District One. He was Vice President of Plumas-Sierra Counties Farm Bureau and he served on the Sierra-Plumas Joint Unified School District Board.

Jim’s favorite place for the last 49 years was at the ranch, surrounded by his family. However, he did venture out in his “retirement” years on RV trips with Maylou and their friends and family. The couple also flew to Hawaii and Mexico, cruised to Alaska, and he made occasional trips to Reno for entertainment and fellowship at the Atlantis Poker Room.

He was predeceased by his father Bill, mother Bea, sister Patsy, brother Roger, and many other family members and friends.

Jim was a devoted family man who was adored by his family. He will be greatly missed, and will forever live in the hearts of all who loved him.

At his request, no public service will be held.