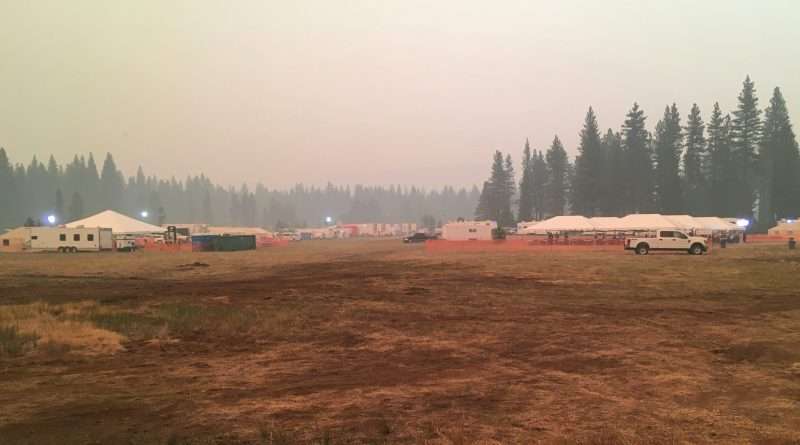 By 5:30 on Friday, June 30 the meadow next to George Young Park in Westwood is looking like a small city. With more than 4000 fire personnel deployed on the Dixie Fire the Incident Command Post (ICP) requires an enormous facility to take care of the firefighters as they rotate in and out of the fire lines. Sleeping areas, eating areas, fresh water, hot water (showers) and maintenance facilities are needed to keep everyone and their equipment in good working order. One fireman noted, “Prayers are always appreciated too”. Photo by Gregg Scott
News
July 23, 2021July 26, 2021 Editor

Tonight’s Dixie Fire briefing meeting featured presentations from both the West zone and East zone of the fire – so there was something of interest for all of the residents of Butte and Plumas counties affected by this fire, which as of tonight has grown to 167,430 acres, is 18 percent contained and has 4,266 personnel assigned to it. The Fly Fire that established itself yesterday near Keddie in the Feather River Canyon is 3,800 acres.

The briefing kicked off with a presentation that would interest everyone who was watching the live meeting via Facebook or on Zoom. Meteorologist Julia Ruthford discussed the upcoming weather pattern and how it will impact the fire. The area has entered a warmer, dryer weather pattern with temperatures set to increase over the weekend. Humidity has dropped and it’s significantly dry, she said. Winds will continue from the southwest during the day, albeit not as strong, with a northeast flow increase in the evening.

The northeast flow will continue this evening and canyon winds will be enhanced. The pattern continues tomorrow, but by Sunday mid-level moisture moves in that allows the extra tall white clouds to grow on top of the smoke columns. The smoke columns have the potential to influence the fire behavior.

From Monday through Thursday the weather changes to be monsoonal, which she described as helpful and harmful – moisture will bring some precipitation, but also lightning and winds. She described it as “Potentially a bad thing, or a good thing, or a combination of both.”

Chris Waters, the incident’s fire behavior specialist noted that the column above the fire looked quite a bit different today. He said the hot atmosphere kept the column from growing as much. Spotting was still seen out on the fire line, but not allowed to establish themselves. Because firefighters are working on direct and indirect suppression, “spots cause us to have to move further away.”

Operations section chief John Goss who reported for Team 2 on the East zone said firefighters have had success from Highway 70 to Bucks Lake.

The bulk of the fire’s movement came from the spot fire that established itself near Twain two days ago. The second most fire activity had to do with the Fly Fire, where crews are going direct, trying to keep it out of the Mount Hough area and Highway 70 corridor. This is the fire that has all of Quincy on evacuation warnings. He explained that the fire got its name because it started near Butterfly Valley. When dispatch receives the report of a fire they name it based on where it is geographically located.

Reporting for the West Zone,  Mike Wink said the left flank is holding in the containment line. But the area toward Butte Meadow, Snag Lake and Jonesville presented problems yesterday, and crews are building indirect line on this.

Working the area of Butt Valley Reservoir, crews went back to Canyon Dam and picked up a road system. They were able to do a firing operation which paralleled Highway 89. “Folks in the area saw the fire’s edge pretty close to Highway 89; that was us doing backburns.”

From Butt Valley Reservoir to Caribou, crews are trying to box in the fire and work down to Highway 70. There are historical structures and homes in the area.

Butte County Sheriff Kory Honea discussed why Butte Meadow was put on mandatory evacuation because of the fire spread. He said he had been up there with 25 deputies who were going door to door and would remain in the area to patrol

Sheriff Honea struck the most somber and stern note of the night. He discussed the number of new fire starts in his county in the past two days and said one was attributed to a guy weed eating and another person using heavy equipment. He said luckily crews were able to stop the fires quickly, “but luck will not last. So if you are going to be out there doing things that can cause a fire – stop.”

Todd Johns read a list of the evacuation orders for Plumas County, which seems to cover just about everyone in the county except for the eastern end, but they just went through the Beckwourth Complex.

He reminded residents who choose to stay in a mandatory evacuation zone that it doesn’t mean they can have free movement in the community.

There are currently three evacuation centers for Plumas County residents: Chester, Quincy and Red Bluff. If Quincy is forced to close due to mandatory evacuations, a site will be established in Portola.

He explained that certain triggers are established before an evacuation order is given and a lot of factors are considered including how large the evacuation area is. A small community’s trigger point might be closer than a large community like Quincy or Chester, he said.

He said anyone with questions about any aspect of the fire can call the 283-3242 information line. I would just like to thank the citizens of the county for their tremendous support and the officers of the state who have come to help, he said.

Chris Carlton, the Plumas National Forest Supervisor, acknowledged the impacts the fire is having and noted that this is the second major fire in the past couple of weeks (Beckwourth Complex, which broke out June 30/July 2).

“ We are doing absolutely everything we can to put this fire out, he said. “Still coping with the devastation from Frenchman.”

As far as damage assessment, there are eight confirmed structure losses, though there will be more – assessment teams are still working and contacting property owners.

John Goss offered more details on the Fly Fire. He said that initial air attack found it already to be 10-15 acres with spotting. A combination of Dixie crews as well as the Plumas National Forest responded. By the end of the evening yesterday the fire was 1,600 acres,  then 2,100 acres; now it’s 3,800 acres. The fire has not spotted over Mount Hough.

Bucks Lake containment line is mopping up and secure. He is confident Bucks Lake proper won’t be impacted.

Mike Wink  provided an update for the Chester area  and said that most of the fire spread has been to the north and the east. “For right now Chester is not having fire spread,” he said.

Prattville has black line below it. While there is fire several miles away, nothing is spreading quickly toward it. Both zones have groups identified for surge resources. Yesterday when the Fly Fire started the surge crews were diverted there.

There are 18 inmate hand crews on the fire.