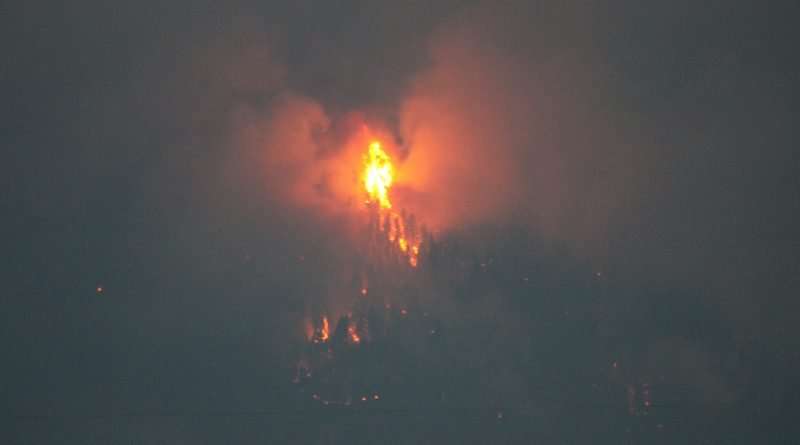 A view of the Dixie Fire yesterday from North Valley Road in Indian Valley. This morning the smoke is too thick to see the flames. Photo by Sherrie Eckels
News
July 30, 2021August 1, 2021 Editor

Today is July 30, exactly one month after the Dotta Fire broke out near Beckwourth, which eventually became the Beckwourth Complex Fire. Before that fire was even put to bed, the Dixie Fire arose on July 13. Last night lightning ignited more fires in Plumas County and winds spread areas on the Dixie. Luckily, there are now more than 6,000 fire personnel in the area to help stave off this onslaught.

This morning the Dixie Fire is reported to be 240,595 acres and 24 percent contained, with an estimated containment date of Aug. 13.

Operations Section Chief Mike Wink presented the morning update, which included the usual update on the Highway 70 corridor and the bottom portion of the fire, which has no change. He also reiterated the work that is being done on the perimeter designed to protect the Butte Meadows area. He said that residents in the Almanor Basin should expect to see interior fire burning so more pyrocumulus clouds could develop. Those are expected to occur and there is nothing close to the line.

Up to Humboldt Summit and along Humboldt Road, crews will continue to introduce low intensity fire to burn fuels between the fire and the perimeter. More than 230,000 gallons of retardant have been used to protect areas in heavy timbered area.

Parallel to Highway 89, patrol and mop up efforts are underway. Wink reminded residents that low intensity fire is used to clean up ground fuels, but it doesn’t mean everything in its path is destroyed.

From Canyon Dam to the Caribou drainage, lightning was reported outside of the perimeter. It created downdraft winds and an 1,800 acre fire expansion in the Caribou area. West Zone and East Zone team members are developing a plan to deal with it.

Fire Behavior Analyst Dennis Burns said that there was some pretty significant outflow winds on the fire, but “all in all had a pretty good night.” The area west of Bucks Lake is in patrol status. Moving up into the Bucks Lake Wilderness, last night crews were able to do some burning, but due to adverse winds, had to send crews to another part of the fire -in the Caribou area. Coming over west of Highway 70 and north of Quincy, fire tied into railroad tracks – and they are working essentially above Oakland Camp. Burns said in the next day or two he expects to see more black on the map, which means that fire officials are confident that the line will hold there.

Burns said that winds surfaced yesterday, and the fire would have jumped Highway 89 and endangered Crescent Mills  if crews hadn’t been doing burning operations. They also took quick action on a few spot fires. Moving up along Dixie Creek everything is looking good.

Across Round Valley, there is line until it gets to a deep ravine where it is very steep, and hard for crews to access.

He addressed the Caribou drainage area just as Wink had on the West Zone, and said a plan would be developed.

As a result of those thunderstorms Dixie Fire personnel picked up the Evans Fire, which is in the Moonlight scar. This fire is up Diamond Mountain Road behind the Buffalo Ranch northeast of Greenville, and is at approximately 45 acres. Crews have built line and tied the head of the fire into the Dixie Fire. Resources on-scene consist of: 19 engines, 3 crews, 3 dozers, 3 water tenders, 2 crews, 130 total personnel with IC Tom Grabs in command. Additional resources are in-coming and air resources will be available if needed and able to fly. 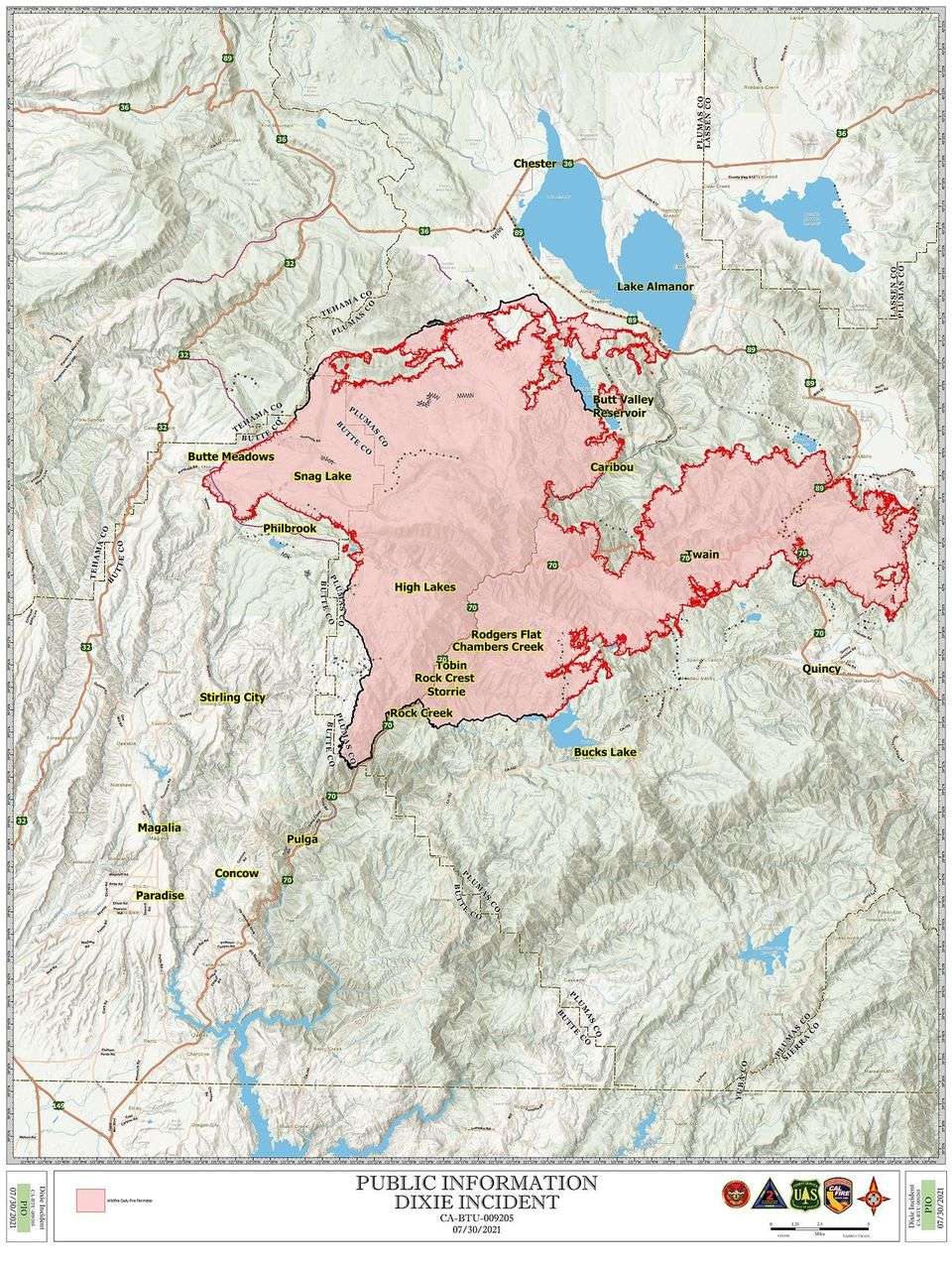 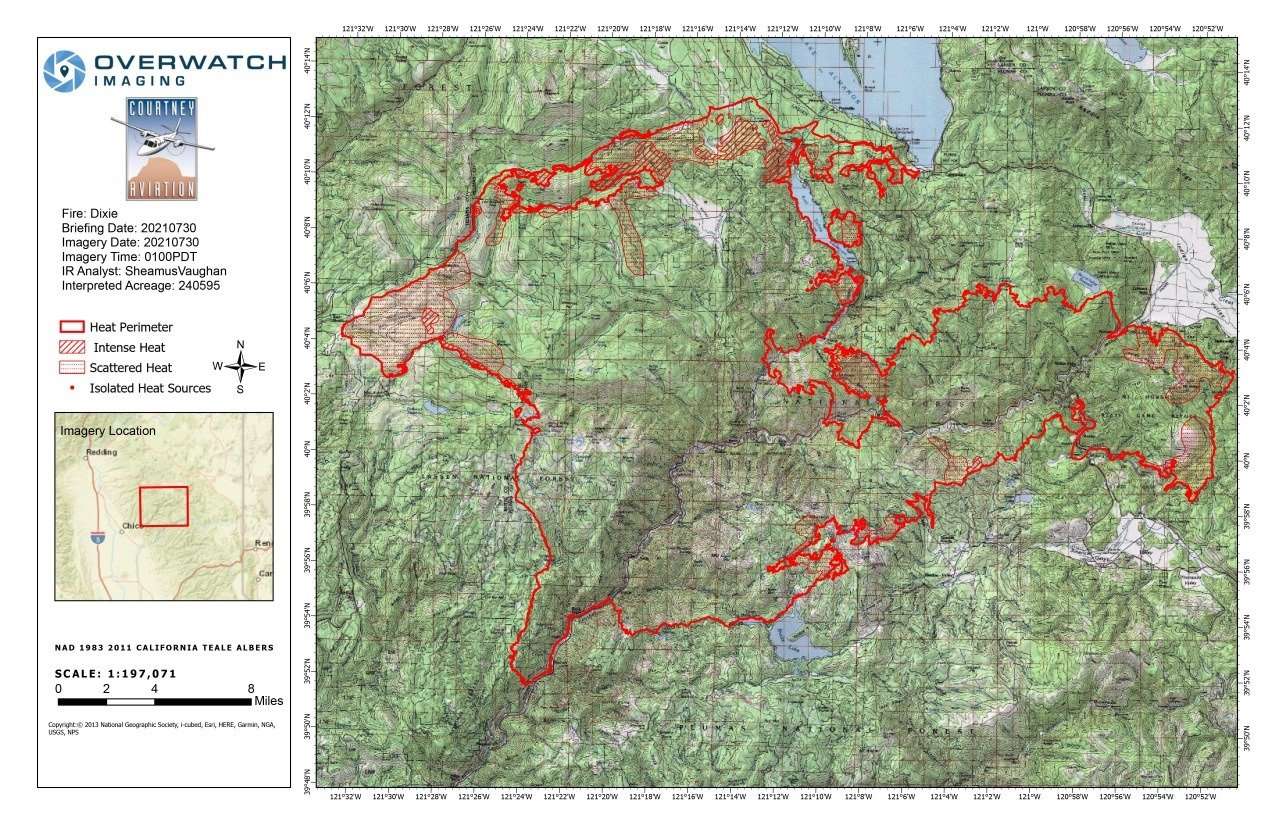