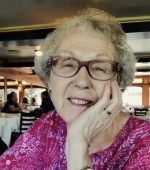 The only child of James Bamford and Evelyn Reid born in Cleckheaton, Yorkshire, England, in January 1935, she lived through WWII taking many lessons from that experience. Kathy received her degree in English and became a teacher, a career that she continued for over 60 years in three countries.

As a young woman, Kathy was invited to teach in Toronto, Canada, where she met her future husband, Ennio Luigi Frigo, from Vicenza, Italy. In 1960 they moved to San Francisco, California, beginning their lives in the United States where their three children, Sara, Daniel, and Julian were born.

Over the years, the family lived in the United States, England and Italy, but wherever Kathy was she remained proud of her English roots. She taught English as a second language in Italy until 2018, and retiring at the age of 83, she moved to Quincy to be closer to family.

An extraordinary and cultured woman with an adventurous spirit and great sense of humor, she lived an independent life to the end. Kathy was adored by her beloved children, grandchildren, all her friends and students, and the many people she met during her life journey. She is dearly missed around the globe.