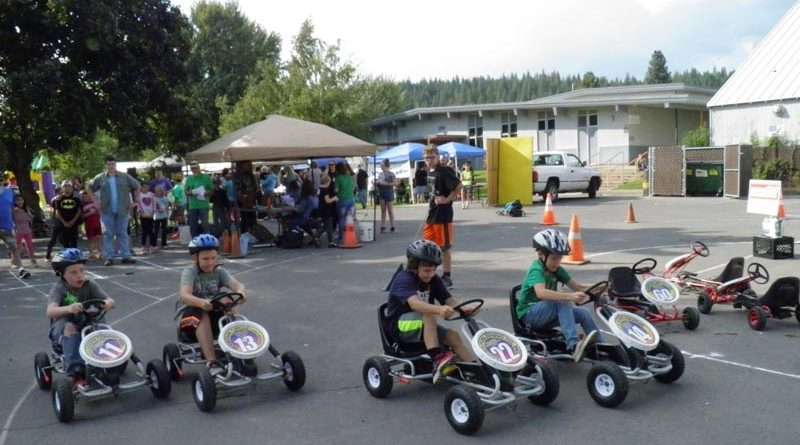 One year after a pedal car race at Evergreen Market’s annual Kids’ Fest, a young girl came up to Russ Flint — who puts together the pedal car portion of the event year after year. His passion for pedal cars and sharing his love of the old-timey event is evident when he speaks.

“I tried to win this race for three years now, and today I won second prize. I am so excited, because I stuck with it. I kept coming back until I finally won,” Flint recalls the girl telling him with pride.

This is the kind of perseverance and work that the founders of the event, Ken and Centella Tucker, owners of Evergreen Market, love to see in young people.

“Youngsters like this one are what excite me and keep me and my team coming back every year doing it again and again,” said Flint.

Kids’ Fest began in 2001 with Evergreen Market becoming an IGA store. It was originally an IGA suggestion as a way to get out into the community and a promotion for the store. They were amazed at how the late summer event — originally in the parking lot of the Evergreen Market — took off.

“Not every kid from our community gets to go to the fair,” Ken Tucker said. Kids’ Fest provides local kids, many within walking distance of the market, an opportunity to visit the booths, do activities and participate in the pedal car races — for free.

“Where else can elementary-age school children compete alone against fellow contestants in a completely safe venue, no falling down, no tipping over, giving it all they’ve got for two whole minutes with their family and friends?” said Flint.

That’s why he does the race year after year.

While Evergreen Market is the sponsor of the event, Ken Tucker credits Flint as being the mastermind behind it.

The event has evolved over the years and moved. The parking lot in August proved to be too hot and so Evergreen Market asked the school district if they could move it across the street to the grass and shaded area next to the high school and have been there ever since.

It also evolved into way more than a single business event and Ken Tucker encourages it to be a community effort. Tucker is happy to see more county agencies and local groups get involved. Nowadays many nonprofits have booths at Kids’ Fest and offer brochures with information, give away school supplies and healthy snacks.

Quincy businesses as well as Indian Valley businesses now sign on to help make the event a success.

Flint works to make the event successful every year, connecting with volunteers who want to give the kids of Indian Valley the opportunity for one more fun carefree day as they say goodbye to summer.

But the real reason why Flint keeps going with the time-consuming even? He thinks back to the girl who smiled at winning second place and others like her.

“I sincerely thank that one little girl who never gave up!” Flint said.

This year’s Kids’ Fest takes place in the late afternoon, Aug. 28, from 3 p.m. to 6 p.m., across the street from the Evergreen Market on the lawn of Greenville High School. All kids are welcome and the event is always free.