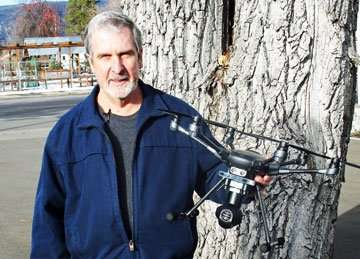 With Christmas fast approaching, several folks have mentioned they are purchasing a drone as a gift for a family member.

A total lack of knowledge regarding this fairly recent technology prompted a desire to do some research about the safety aspects of this increasingly popular toy.

Within a very short time period it became obvious that no matter the intentions of the purchaser/operator, the use of an Unmanned Aircraft System/Unmanned Arial Vehicle (UAS/UAV), commonly referred to as a drone, is anything but playing with a toy.

One of the most apparent aspects regarding the seriousness of drone ownership is the fact that all UAS/UAV systems are subject to specific regulations issued by the Federal Aviation Administration.

The FAA requires every drone owner to register each drone purchased if it weighs over 0.55 pounds or about 8.8 ounces.

If the drone is not registered and label identified, you may be subject to serious legal consequences.

With the goal of getting more practical information on the subject, the Chester Progressive asked Rob Herr, the owner of Red River Drones and the only licensed UAS/UAV pilot in Plumas County, to fill in some of the day-to-day information about flying drones.

Herr explained that on June 21 the FAA finalized a new regulatory framework for small-unmanned aircraft systems.

The new regulations were implemented Aug. 29, with many addressing safety issues.

For example, drones cannot fly over people who are not directly participating in the flight operation.

Operators must keep their drones within visual line of sight, that is, the person flying the drone must be able to see it with the naked eye.

Drone flights are allowed only during daylight hours.

All drone flight is prohibited within a 5-mile radius of any airport, regardless of size and all flights must stay at an altitude less than 400 feet from the ground.

There are also privacy rules about photographing people without their knowledge and permission.

If you want to use your UAS for a commercial venture you:

– You are required to pass an initial aeronautical knowledge test at one of 690 FAA-approved knowledge-testing centers across the United States. (A list that was updated in July 2016 is available online.)

There are several online sites that are designed to guide people through the process, however, they do charge varying fees for their services. Herr said he decided to complete it on his own and he didn’t find it that difficult.

The Transportation Security Administration must also vet the operator’s identity to obtain the necessary Remote Pilot Certificate with a small UAS rating.

Your UAS must be available to the FAA, upon request, for inspection and/or testing, along with any associated documents and/or records that are required to be kept under the regulations.

The aeronautical knowledge test must be recertified every 24 months.

To remain in good standing you must report to the FAA within 10 days any accident or operation that results in injury or property damage over $500.

Herr also stressed that it is very important to conduct a preflight inspection, to include specific aircraft and control station systems checks and to ensure the small UAS is safe for operation.

He also noted that there is UAS flight insurance available online on a flight-by-flight basis if all the requirements are met.

Not to be alarmist, but it truly became evident how serious these regulations were regarding safety issues considering that there is a Military Training Route (MTR) that passes diagonally across Lake Almanor.

This particular MTR is designated IR207 referring to the use of Instrument Flight Rules for low altitude, high speed flights.

An incident between a military aircraft and an unauthorized drone flight could become a disaster quickly.

Flying a drone sounds fascinating and the use of the technology is growing fast in commercial applications so the important thing is to learn the proper operational techniques and safety rules.