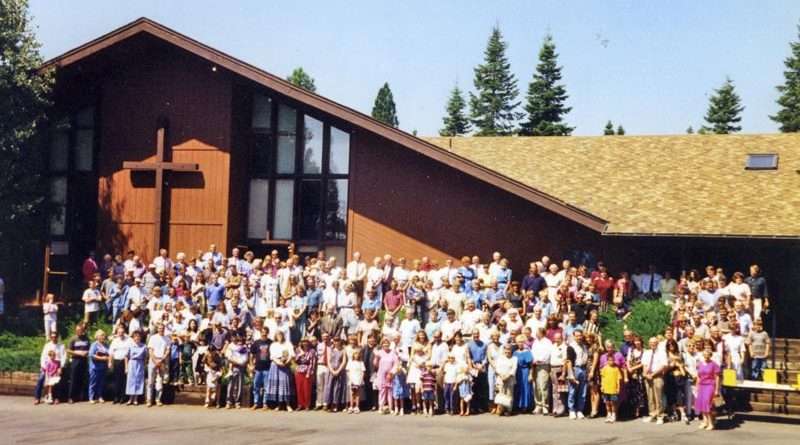 This is an image of the completed first phase of the Lake Almanor Community Church after its completion in 1983 along with the congregation that fills the sanctuary/multipurpose room on any given Sunday. This view is much the same today except for the addition of a beautifully landscaped garden on the facing slope.
News
June 16, 2018June 13, 2018 Gregg Scott, Staff Writer

In the summer of 1977 a group of 10 to 12 Christians that had been meeting together for Bible study and worship decided that they were being directed by God to start an evangelical church for the peninsula and surrounding areas.

The intent was to provide an outreach ministry to the local community, summer residents, vacationers and to the mission field beyond.

By the summer of 1978 they had adopted Bylaws and Articles of Faith and started the process of searching for a pastor to shepherd the newly founded community church.

They called the Dallas Theological Seminary and it happened that a young graduate, Alan Mezger, was sitting in the placement office at that particular time and the phone was handed to him.

Many people might call this a lucky coincidence, but in the eyes of the callers, it was actually divine providence that brought Mezger to Lake Almanor as the first pastor of the Lake Almanor Community Church.

The group had been meeting in family homes and the plan was to continue in that mode until the church grew to a size that required a larger venue.

Divine providence entered the equation again and within a short period of time the Peninsula Fire Hall #2 was made available as a Sunday meeting location.

The congregation grew rapidly and about a year later there were right around 200 people attending the services during the summer.

The year 1979 was a breakout year in several respects for the church.

The property where the church building currently sits was purchased and plans for a 7,000-square-foot building were under way, Robin and Terry Cook were the first missionaries supported by the church and Youth Intern Ray Johnson was hired for the growing youth numbers.

Through the efforts of volunteers and church associated contractors, the first building phase was almost complete in July of 1983 and services were moved to the new building.

As Pastor Mezger was preparing to go to the mission field, the search began for a new pastor, which resulted in Pastor Bill Town coming to the church in December of 1983 and in 1984 Rich Fisher was hired as the first full time Youth Pastor.

Over the years, there have been many changes in both congregation and Pastoral staff along with expansion of the physical facilities.

Youth pastors that have guided the kids include Jimmy Smith, Floren Suetos, Matt Jensen and Paul Bernard along with full time Worship Pastor John Erickson, who came on board in 2000.

Very importantly, the congregation has taken on support of many new missionaries, a Christian school and local programs like AWANA and Celebrate Recovery.

The members of the Lake Almanor Community Church are inviting all that have had their lives touched by this gathering of believers to come celebrate the 40 years of blessings to the congregation and community.

The invitation says, “We’re celebrating 40 years of God’s faithfulness here at LACC! Join us on June 23. Festivities begin at 3 p.m., with fellowship and appetizers. The program starts at 4:30 p.m. and tri-tip dinner will be served at 6 p.m.”

Even if you have never been to Lake Almanor Community Church before come on out and meet the folks that have been a part of this amazing story of faithfulness and blessings.