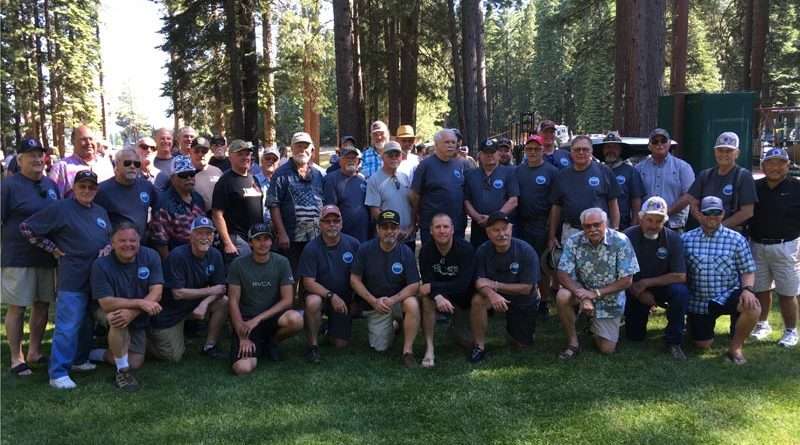 Here are most of the boat captains that volunteered their time, energy and boats to spend a day on Lake Almanor to provide the 97 registered veterans a chance to enjoy one of the best fisheries in Northern California with a day of angling for rainbow trout, brown trout, king salmon and small mouth bass. Many of these captains are also veterans themselves. Photos by Gregg Scott
News
July 3, 2019July 8, 2019 Gregg Scott, Staff Writer

Veterans from across Plumas County and beyond gathered June 23 for a day of fishing on Lake Almanor.

Later in the day, those guides and veterans along with many family members met at Lake Almanor Country Club Rec. #1 facility for an afternoon of delicious food and a drawing for door prizes galore.

One of the highlights of the barbeque was the introduction of three World War II veterans that were enjoying the event.

John Bottomley, 96, served in New Guinea from 1942 to 1946 with the Army Air Corps 519th Squadron. He related that one of the greatest honors of his service was meeting many of the “Code Talkers” as they proceeded through his location on their way to their assigned units.

Later in his career, while flying an F80-Shooting Star, with the 16th Fighter Interceptor Squadron (FIS) in Korea, he was part of the air unit that shot down the first MIG over Korea. This day he was actually on temporary duty with the 16th FIS from  HYPERLINK “https://theaviationgeekclub.com/lieutenant-colonel-ben-bowles-first-sr-71-pilot-to-reach-900-hours-has-passed-away/” \t “_blank” the Okinawa-based 26th FIS.

Two-hundred fifty veterans, family members, AFA members, and volunteers from numerous groups related fishing stories from the day on the lake and readied themselves for supper as the aroma from the Elk’s Lodge tri-tips and chicken wafted across the picnic area.

The Lake Almanor Elk’s Lodge served up copious amounts of beef and bird along with Caesar salad, potato salad and a ton of homemade deserts.

AFA President John Crotty expressed a special thanks to all the partners that make the event so special including PG&E, the Forest Service and California Department of Fish and Wildlife.

Thanks to Matt Goodrich for organizing the picnic, LACC for the picnic location and to the Elks for a classy meal.

The Hamilton Branch Fire Belles supplied a PA system for the event.

The outpouring of door prize donations was amazing not only in quantity, but also in quality.

Field of Dreams: Event hats for all veterans and captains and 2019 Wild Pig Hunt.