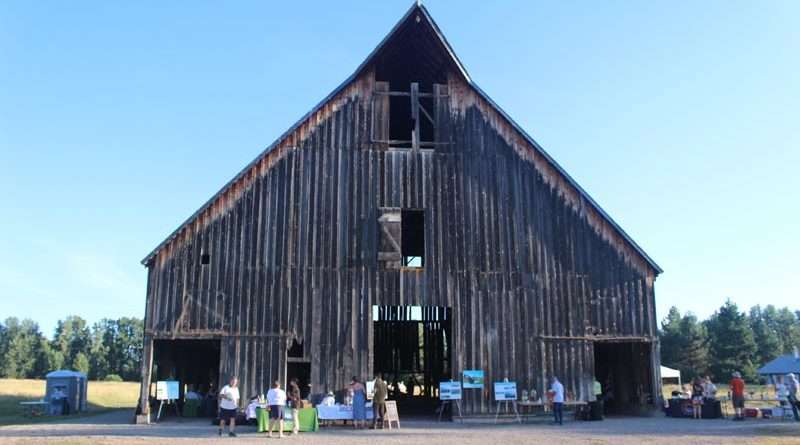 The Feather River Land Trust hosted the Olsen Barn Dinner & Dance on Aug. 3 to celebrate the conservation and restoration of the amazing 130-year old Olsen Barn and Meadow in Chester. The event was completely sold out with 175 people in attendance.

The late afternoon festivities included appetizers, food, a drawing and local craft beer provided by Waganupa Brewing, and wine, as well as live music performed by the Lost Sierra Ramblers.

Barney the barn owl was high in the rafters overlooking the proceedings. He seemed wholly unaffected by the dozens of people below pointing up to him and taking his picture.

The emcee for the evening, FRLT Development Associate Katie Bagby, took to the microphone to thank the many members of the community that supported the purchase of the Olsen Barn and meadow property for the benefit of all.

“On behalf of the Feather River Land Trust, we’re so glad you’re here tonight to celebrate this beautiful barn and the success of the community in protecting it,” she said, at which point Bagby introduced executive director of the land trust Shelton Douthit.

Noting that this was the first time hosting an event inside the barn, Douthit provided an overview of the FRLT’s mission and its founding, recalling that, “We were formed in 2000 by local people like you who care about the watershed.”

Speaking of the Olsen Barn Meadow, Douthit shared, “The goal of our effort is to protect this 107-acres with the barn as the centerpiece,” he said, “which also contains incredible resources,” including the North Fork Feather River located adjacent to the property, as well as wildlife — everything from birds and insects and other creatures that populate the terrain, “to the people who enjoy the open space and magnificent views.”

Continuing, Douthit said, “This place is a wonderful opportunity for the community to connect with this landscape, from the kids in Chester to all of you that are a part of this effort. … We could never have protected this property without every single one of you helping us, both as volunteers and as donors.”

Douthit pointed out one key person, retired FRLT Development Director Karen Kleven, who he said was instrumental in making the acquisition of the Olsen Barn and meadow happen by spearheading the Save the Olsen Barn campaign.

Stepping up in front of the crowd, Kleven said, “It’s really wonderful to see everybody here today, so many familiar faces,” further confiding that, “There are so many things we don’t have control over, that we wish we could change, but some things, especially at the local level we can control if we are compassionate and work together, like keeping this meadow — a remnant of Big Meadows — and the historic Olsen Barn protected and open to the public forever.”

She acknowledged that it took the contributions of the wider community to make the ongoing restoration work of the Olsen Barn transpire, together with the support of a number of organizations and businesses, including the Collins family, the Lake Almanor Country Club, Plumas County Public Health’s 20,000 Lives Initiative, the Chester Progressive as well as people who no longer live in the area, but had fond memories of the land and were willing to donate to the cause.

Kleven also mentioned how Supervisor Sherrie Thrall was able to repurpose $400,000 in state funds toward the project.

“But you the community had the passion and the drive that kept us motivated to raise the additional $400,000 we needed” to make the final purchase of the land possible, she said, noting that the FRLT had received donations from 435 caring individual donors with 541 donations in total when merchants and other entities were included.

She pointed to the wall located near the entrance to the barn featuring two plaques listing people who gave monies to help stabilize the barn and other improvements, including a new cement foundation.

“What is so thrilling to me is that we worked together toward a common goal that had nothing to do with divisive politics. … We all love this place and did what we could” to make it come to pass “and make a difference.”

North Region Stewardship Manager Nils Lunder also spoke to attendees inside the barn and said the land trust knew there would be a lot of work involved for FRLT staff.

“I was handed the keys to the ‘palace’ in late 2015 when we finally took title, and I was asked to manage the Olsen Barn property. I said okay because I’m Norwegian after all,” he quipped. “… Working on barns was the next logical step in my personal journey.”

He shared that the barn was in “sad shape” at that time after nearly a century of disuse, but that it was “an amazing structure,” adding that, “Peter Olsen knew what he was doing,” in its original construction.

“We wanted to see how we could honor Peter Olsen’s craftsmanship,” Lunder said, when the FRLT looked into recruiting local contractors like Greg Lopez Construction and his crew to do the upgrades that are still underway, “along with forming the Olsen Management Group and creating an Olsen Management Group Committee to oversee the work that needed to be done.”

Lunder went on to say the FRLT is currently involved in a number of conservation projects, using the Olsen Barn property as a model for future land trust acquisitions.

“We want the projects we’re doing to be well-aligned with the needs of the community, and not just imposing our values” without community input, he said.

The FRLT is also currently working on a multi-year project, where lands in the Upper Feather River Watershed are preserved permanently through conservation easements as open space — 44,000 acres in all — including identifying designated access points for public use.

“There are great things happening with the FRLT,” Lunder continued, adding that the staff believes in its mission, “And the cool thing is we’re all part of it.”

In addition to working on renovations on the barn, Lunder announced that the surrounding meadow behind the barn now has five benches installed available for outdoor classroom studies, as well as trails for hiking and visiting the lakeside, bird watching, dog walking, picnicking and more.

Douthit brought the dedication ceremony to a close by stating that, “We’re all working together to protect this beautiful place. … It can’t be done without all of us working toward a common goal,” further adding, “That’s what I love about land trusts, they’re truly committed to community-based conservation efforts.”

Douthit also wanted to thank the FRLT board members and outdoor educator Rob Wade who are “all extremely dedicated individuals. It’s their leadership and direction that keeps us all moving forward.”

FRLT associates said they appreciate the community’s commitment toward the land trust’s plans to use donations to conserve thousands of more acres of unique wetlands and meadows by 2021, protecting clean and plentiful water, including breathtaking open spaces where people, plants, and diverse habitats for wildlife can thrive.

Of special note, a matching opportunity was revealed at the dedication ceremony — a generous donor would match every gift of $100 or more, dollar for dollar up to $25,000.

Katie Bagby stepped up once again to thank attendees for coming to the special event.

“Only with your help can we ensure that this landscape remains healthy and resilient today and for future generations.”